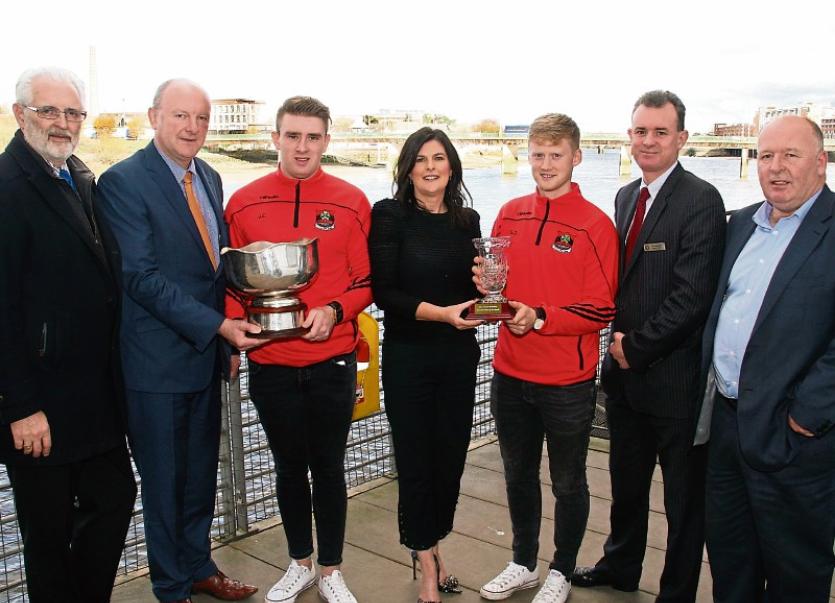 IN RECOGNITION of their awe-inspiring performance which saw them claim the county senior title for the first time in their history, Adare footballers have been honoured with the Limerick Person of the Month award.

Adare were 20/1 outsiders from the start of the championship and appearing in just their third ever final. An injury time goal from Jack English sealed the title in the Gaelic Grounds for the Harry Gleeson managed side.

Harry and Jack along with team captain, Shane Doherty, and club chairman, Joe Hannon, attended the presentation at the Clayton Hotel this week.

“As I said in my speech, it’s probably the biggest honour in my life so far - to help make history for the club.  It was huge for everyone playing, the management and entire club to make history,” said Shane in the lobby of the hotel where the Fr Casey Cup rested beside the Limerick Person of the Month crystal vase.

Last season, Adare were promoted from intermediate to the senior ranks. Manager Harry Gleeson is in his second season at the helm.

From a GAA point of view, Harry had no previous experience of managing a senior football side. He coached underage hurling in Mungret for about seven years and was treasurer for four years when they did the field development. He then moved his focus to Dooneen Athletic Club and Catholic Institute senior men’s hockey side helping them to many high profile accolades along the way.

“I took a year out as I was doing exams myself and then I got a call from Alan Fitzpatrick who runs Chawke’s Bar, looking to see if I would link up with Mikey Lyons who was one of the key players,” he explained of how he became involved with Adare.

It didn’t daunt him that he hadn’t managed a senior football side previously.

“I don’t worry about those things. You are managing a group of people and they are a lovely group of lads - top class. There is a great bit of trust there on both sides.”

While he admits that he “wouldn’t be your typical GAA type manager”, Harry believes that his own life skills of dealing with people has stood to him.

An ex-banker, Harry is now involved in debt management.

“I negotiate where people would owe a lot of money to institutions and I really try and get as much of it written off as I possibly can.”

Much of the success in terms of getting the best out of the players this season can be put down to the introduction of  video analysis.

“We do a lot of that. I think it’s vital,” said Harry. “I think a lot of guys sometimes can have a perception of how good they are but when you show them the screen, it doesn’t lie. It’s not used as a tool to beat anybody. All you can do is do your best and hope everyone buys into it.”

All the players fight for their place to the point that they are even nervous about taking a week’s holidays in case their place might be gone when they come back.

Adare club chairman Joe Hannon paid tribute to Harry for unlocking the potential in the players. “We needed a little bit of direction and a little bit of organisation and in fairness Harry brought those qualities. That bit of heart, spirit and belief came into it.”

Reflecting back on the famous victory on October 22, Shane Doherty said when the final whistle went it was “unbelievable”.

There had been very tense moments at the end of the game with Newcastle West going ahead by a point in the first of four minutes of injury time.  But up popped Jack English with a cracking goal when others would have opted for a point. Sub Charlie McCarthy then sealed the historic win.

“The average age of the team is very young so I think the fact that we are so young means there is a fearless aspect to it. We don’t really fear anyone,” said Shane, 24 who is teaching PE and biology in St Mary’s Secondary School in Nenagh.

“Even when we went down a point towards the end, we kind of knew we would get the draw - we weren’t too worried about it. Jack got the winning goal. If there was an older fella he might have only gone for the point.”

Jack English said to bring the Fr Casey Cup back to the village for the very first time was  “a magical feeling”.

“I lost my place for the first game of the quarter final and Harry rang me and said, ‘Look, you are not performing well so we are going to have to drop you. He was straight up with me. I was heartbroken but I worked hard to get myself back on the team and ended up starting for the final - it all fell into place, thank God.”

Adare now progress to the semi final of the Munster club SFC playing Cork’s Nemo Rangers this Sunday in Mallow.

“We are quietly confident, I’ll say no more,” said Jack who is studying Business and Sports Management in LIT.