Refugee smuggled from Iraq graduates from Limerick Institute of Technology 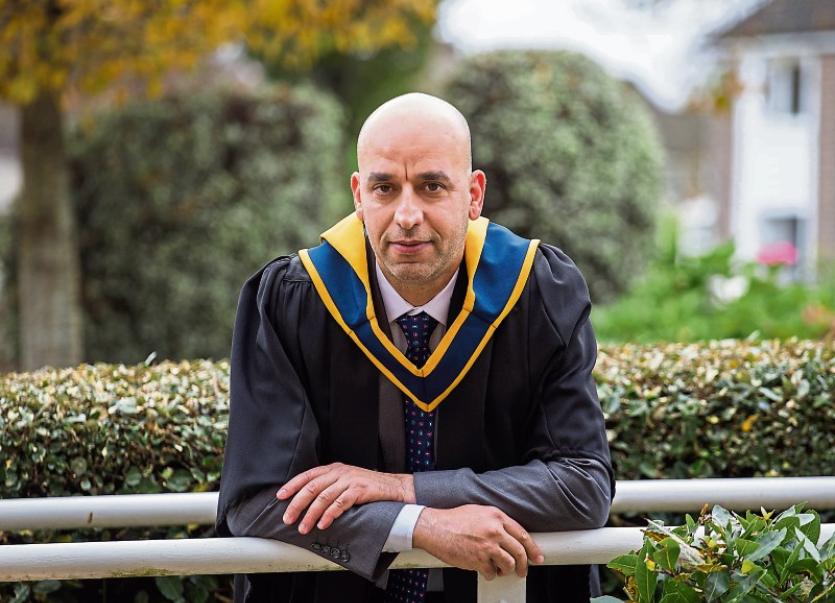 Dhafir Alani at his graduation from Limerick Institute of Technology Picture: Alan Place

IT’S BEEN seven years since Dhafir Alani was smuggled out of Northern Iraq with 27 dollars in his pocket — fearing for his life.

And despite all the challenges he has overcome, the 46-year-old may well have celebrated his proudest moment last week, on the day he became the holder of an honours degree from Limerick Institute of Technology.

When war broke out in Iraq, Dhafir was forced to abandon his original studies in electronic engineering, instead taking up arms, with everyone else, in the country’s military forces — service to which was compulsory when the country called.

Now one of LIT’s new graduates in the Bachelor of Science in Electronic Systems, the native of Kirkuk city is optimistic about the future.

“I came, no money, no clothes, no education. And look today at what I did,” he exclaimed.

After arriving in Ireland using false documents in 2010, Dhafir entered the asylum system, and was sent from Dublin to Knockalisheen direct provision centre.

After just two months in the system, Dhafir was granted status as a refugee. He was told to leave Knockalisheen, find an apartment and start his new life.

“I saw Limerick to be a nice city, and I had some friends,” he said, of his decision to stay locally. Having entered Ireland with very limited English, he completed a course to improve his language skills, and later successfully interviewed at LIT.

“I applied to LIT to continue my studies, to try to get a degree, to start a new life, to find a job,” Dhafir said.

After three years as a refugee, he was eligible to apply for Irish citizenship, eventually celebrating another milestone when he was awarded an Irish passport.

“As everyone knows, we have serious trouble and conflict in Iraq. It was very dangerous in Iraq at the time, and you can see in the news that it still is today. My story was the truth, I came because there was serious danger,” he said.

“I left my college in Iraq when the war came, but I still had in the back of my mind, ‘I need to finish my degree’. When I came to Ireland, I got the opportunity. I love Ireland, and I want to thank the Irish Government, to be honest, because they’ve given me a good chance.”

After seven years in the Iraqi army, and at the age of 38, Dhafir resolved to “leave because there was no safety”.

“I felt danger for my life. I found some person to help me, a smuggler, to take me illegally. It’s not easy to leave your country, and come in to a different culture, language... And now to get my citizenship, and my degree. I’m proud of what I have done.”

He spoke of the kindness of a stranger on his arrival in Ireland. A Galway woman named Mairead saw Dhafir through the airport in Dublin, helped him to get to his bus, and also let him call his sister back in Iraq, to tell her of his safe arrival.

Hopeful for the future, Dhafir is planning to get a job and start giving back.

“I’m applying for jobs. In all of my years studying, the Irish Government paid fees for me and supported me, so I need to get a job to do something for this country,” he added

Dhafir was one of 1,700 graduates across LIT’s five campuses over a series of conferring ceremonies that will continue until late November.