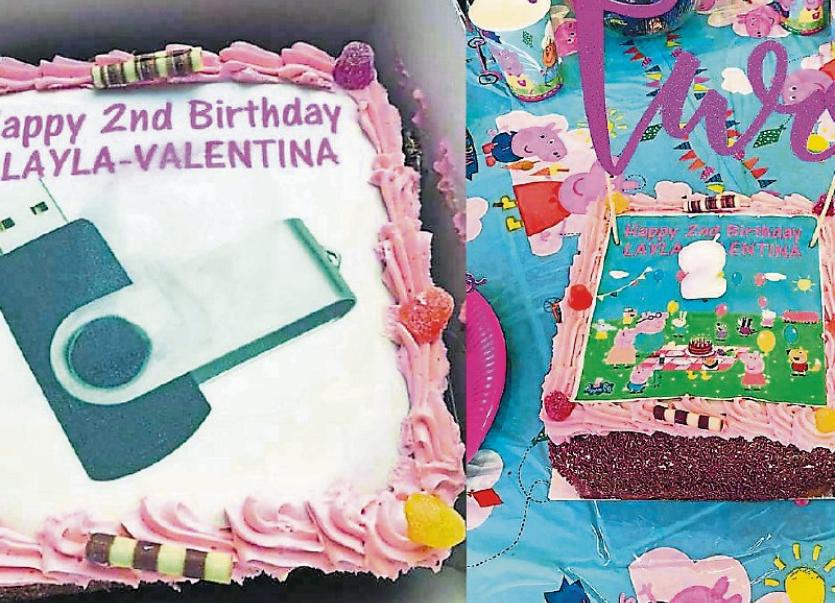 A LIMERICK mother has expressed her amazement at the international interest in a hilarious story that went viral over the weekend.

Karen Moroney, from Newcastle West, got the surprise of her life on Saturday when she collected a birthday cake for her daughter.

Speaking to the Limerick Leader she said: “I went to the bakery to order a cake with an image of Peppa Pig, for my two year old’s birthday. I was asked to put the picture that I wanted on a memory stick, so it could be scanned on the cake.”

Karen handed a USB containing the picture she wanted into the bakery, which led to a hilarious result.

“Someone got their wires crossed and put a picture of the USB on the cake instead,” she laughed.

She said the cake shop saw the error and quickly fixed the mistake.

"They told me when I arrived there was a mistake with the picture and that it’s all fixed now. I went out to the car and saw that the picture was sitting on top of another picture,” she said.

Karen peeled the Peppa Pig picture from the top of the cake to unveil an image of a memory stick.

"I burst out laughing and everybody was looking at me, because I was in the stitches in the front seat of the car. I just thought it was the funniest thing I have ever seen. When they told me it was fixed, I presumed they got a new cake, or took the top off the cake, instead of sticking a picture of Peppa Pig over it,” added the mother.

The story, which has appeared on national television and in the UK media, started when Karen sent a picture of the error to her sister in New York, who then put it on Facebook and “it just spread from there”.

“My grandmother called me to say it was on TV and my aunt said it was on the radio,” she added.

The story got so much attention that even well known celebrity Twink has had her say on it.

Karen said: “I was amazed that Twink would even care, she was more angry about it than me.”

The mother said her daughter still had a great birthday and the cake tasted “fab.”