Roundabout plan at dangerous Limerick junction is being accelerated 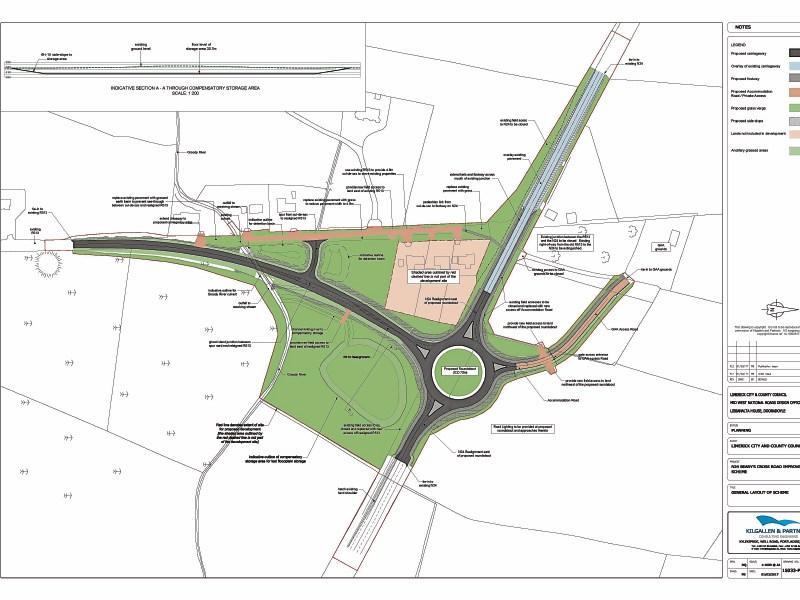 IMPROVEMENT works at one of the most “dangerous” and “busiest” junctions in County Limerick have been accelerated by councillors in the Cappamore-Kilmallock municipal district.

They backed the latest stage in the process to construct a €2 million roundabout at Beary’s Cross on the N24. It connects the R513 Limerick to Mitchelstown Road with the Limerick to Tipperary Road.

Tim Fitzgerald, of the Mid-West National Road Design Office, and consulting engineers - Kilgallen & Partners, gave local councillors a presentation on submissions received after it went on public consultation. It will be a four leg roundabout, north and south on the N24, the link to Mitchelstown and Murroe-Boher GAA club’s pitch.

“We have been waiting so long for this. It is so, so busy,” said Cllr Teefy.

The biggest concern of councillors, and one of the submissions from the association of residents and landowners at Beary’s Cross, is for signalised pedestrian crossing on the N24.

The designers’ response was: “A crossing facility is provided on the N24 on the Limerick side of the proposed roundabout. The scheme will not generate pedestrian movements and is intended to cater for existing movements across the N24. The scheme will reduce the paved width of the N24 at the crossing point and will also act to reduce traffic speeds on the N24. Should pedestrian movements increase significantly in the future, an alternative crossing arrangement can be considered.”

Cllr Bill O’Donnell said the only ones walking across the road will be children going to the GAA pitch.

“We as councillors don’t have the luxury of not worrying about the future. We have to be ready for it,” said Cllr O’Donnell, who pointed to pedestrian crossings at roundabouts in Dooradoyle and Roxboro.

Cllr Mike Donegan said he too was “concerned” there would be no pedestrian crossing. The plan made Cllr Lisa Marie Sheehy feel “uneasy”.

Paul Bergin, a consulting engineer, said motorists might not expect a zebra crossing in a high speed area.

“It could create a greater danger by having a controlled crossing,” he said.

Mr Fitzgerald, of the Mid-West Design Office, said the crossings in Dooradoyle and Roxboro are in urban settings and in 50kmph zones.

“There will be dished kerbs and a refuge on the island [on the N24],” he said.

Also of the design office, Ciaran Hegarty said it would be safer not to have a pedestrian crossing. “You may generate a problem,” he said.

Cllr Ediie Ryan said he doesn’t think it is an “issue”.

“Ninety nine per cent of people will drive to the GAA pitch. No way would you let a child of any age cross that road,” said Cllr Ryan.

All the councillors backed the roundabout design and it now goes forward to the full council meeting. It is hope it will be completed in 2019.