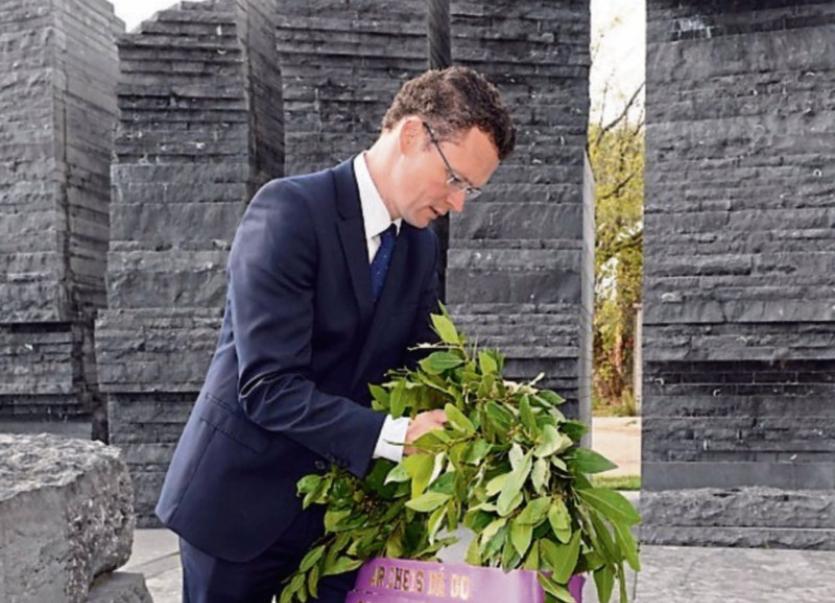 Minister of State Patrick O’Donovan laying a wreath at the Famine memorial in Ireland Park, Toronto

STRENGTHENING the present-day links between Ireland and Canada was at the heart of the recent visit to Canada by Minister of State, Patrick O’Donovan.

But a significant chapter in Irish and Canadian history was not forgotten when Minister O’Donovan led the Irish government's commemoration for those Irish people who, fleeing the Famine at home, died on board coffin ships en route to Canada or shortly after. He laid a wreath at the Famine memorial in Ireland Park, Toronto.

Afterwards he met representatives of emigrants from Ireland who  have recently made Canada their home and witnessed the services and supports provided to them by the Irish Embassy in Canada. Department of Foreign Affairs and the Irish Embassy Provide emigrants.

The Fine Gael junior minister  also held a meeting with a cross-community group which is commemorating two soldiers who fought in the Canadian Army during World War I and who were decorated with the Victoria Cross. One of the soldiers, Michael O’Rourke, was from Co Limerick, and further work on understanding his background is being carried out in Dublin and Toronto.

“There are great opportunities for Ireland to deepen our relationship, culturally, economically politically and otherwise with Canada and I believe that these opportunities will provide real positive benefits for people in Ireland and Canada over time,” Minister O’Donovan said. He welcomed the decision by Air Canada to open a new summer route from Toronto to Shannon, beginning next June,  saying it offered ‘huge potential’ for the entire mid-west region.

“This is a great vote of confidence by Air Canada in Shannon and the Mid-West Region,” he said.

“This will provide us with the opportunity to link directly from Shannon into one of the largest cities in North America, and has opportunities both for tourism and business expansion here in the Mid-West. It is one example of the many investments that are coming to Ireland from Canada and we need to make sure we encourage as many others as we can through visits and engagements like this.”