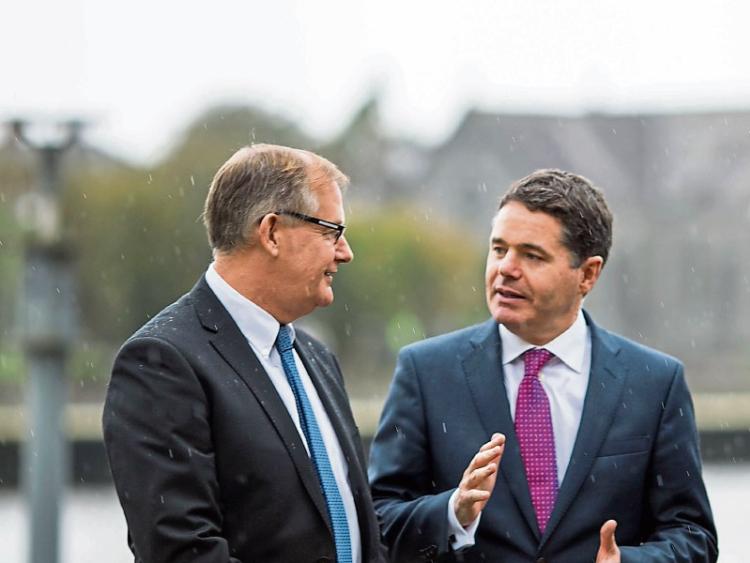 Council CEO Conn Murray meets Minister Paschal Donohoe on his recent visit to the city. The council boss voiced his concern during the visit that the plan was 'limiting' to Limerick’s potential

A GROUP of leading institutions in Limerick have combined to voice concern at the government’s national planning framework as a “missed opportunity” that will add to existing economic imbalance.

The lead authors of a joint submission from the Mid-West Limerick City Region have stated that the vision for Ireland 2040, as set out in the draft National Planning Framework, will only lead to “disproportionate economic growth across the country”.

The grouping, made up of Limerick City and County Council, plus the Clare and Tipperary authorities, along with UL, LIT, Shannon Foynes Port Company and the Mid-West Action Plan for Jobs, made a joint submission to the draft National Planning Framework.

It argues that, while there are some positives to the plan, it “will result in a further deterioration of quality of life in Dublin and its commuter belt and exorbitant infrastructure requirements for the capital, while the city-regions will continue to be under-utilised assets”.

A draft submitted by the group argues “that proper spatial planning and more cost-effective investment in the regions will grow regional economies exponentially, strengthening the global competitiveness of the country by complementing the growth of the capital city”.

It further argues that the Mid-West/Limerick City region will be in danger of losing out on significant investment opportunities while Dublin continues to overheat.

The group has proposed that a high quality motorway network between regional cities be installed, that the Northern Distributor Road be built, that future growth at Shannon Airport is facilitated and transport connectivity to it is strengthened, that the wider role of the Shannon Estuary building on the growth of Shannon Foynes Port Company be enhanced and that a faster rail link between Limerick and Dublin/Cork line be built to allow faster commute times.

“If we are to correct economic imbalances across the island, regional cities must grow more than Dublin does and under the draft NPF, Dublin on its own, outside entirely from its commuter belt, is to have a population growth of quarter of a million, which is more than the cities of Waterford, Cork, Limerick and Galway put together,” said Conn Murray, CEO of Limerick council.

“From our perspective, the development of a Mid-West Limerick city region with a critical mass that has national and international scale is imperative if the NPF is to deliver for the nation. The same applies to the other cities.

“The NPF references Limerick as a regional centre; our aspirations are far greater than that and if we don’t have that ambition, we are not going to deliver for the region and the nation,” he added.

"The Limerick City Region has enormous competitive advantages, including its central location on the Atlantic corridor, its national and international trade and tourism connectivity through Shannon Airport and Shannon Foynes Port Company and a third level complement via UL and LIT that ensures constant supply of graduates.

"The NPF fails to take advantage of this mix."

But it also suggests a growth of some 250,000 people in Dublin – and Mr Murray says all the plan does is “reinforces the imbalance between east and west”.

He made the comments at City Hall, where Dublin TD Mr Donohoe was giving a briefing on Budget 2018.