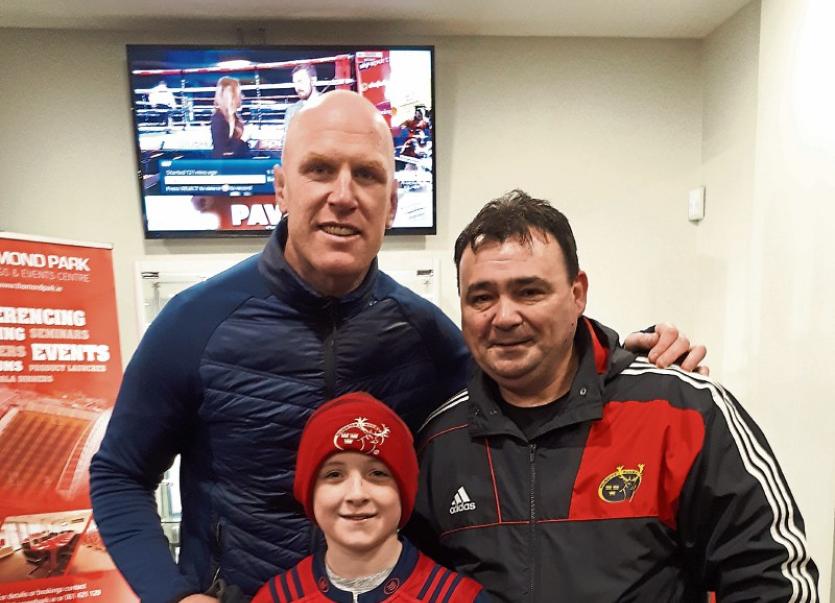 A RUGBY-mad youngster has had a weekend to remember after attending his first ever Munster game in Limerick – and meeting his hero into the bargain.

Zach Molloy, 11, who is originally from Limerick but now living in Britain, has had a lifelong dream to meet rugby legend Paul O’Connell.

Ahead of his visit home to Limerick for the half-term holiday, his mother Louise put out an appeal on Facebook in the hope a meeting could be arranged with the former Irish captain.

A friend of O’Connell – who wishes to remain anonymous – spotted the appeal, and contacted Louise, who now lives in Oxfordshire, and asked young Zach to visit Thomond Park’s main reception after the province’s match against Racing 92.

And on Saturday, after witnessing Munster win 14-7, Zach met his idol for the first time.

Speaking to the Leader immediately after meeting the Heineken Cup winner, Zach beamed: “It is just a dream come true to be honest. It’s like my mind has just been nuked! When I was able to meet him today, I was speechless. He has always had that spark which inspired me. And I like his manic aggression!”

Upon meeting the schoolboy, who originally hails from the South Circular Road, O’Connell posed for pictures, signed his Munster jersey, and took him around the victorious team’s dressing room, where he met members of the current panel.

Zach hopes for a career in rugby, and is already playing above his age category in England, as a centre.

His grandfather Peter Dawson, who took him to the match, revealed Paul told Zach to ‘keep up the good work’, and said he hopes he will some day line-out for Munster in Thomond Park.

Louise added: “I am so happy for him. He has waited for this for so long.”

She praised Paul O’Connell for meeting her son, saying: “I think that man is amazing. I think he is such a great representative for Limerick. His generosity and kindness is just unbelievable.”