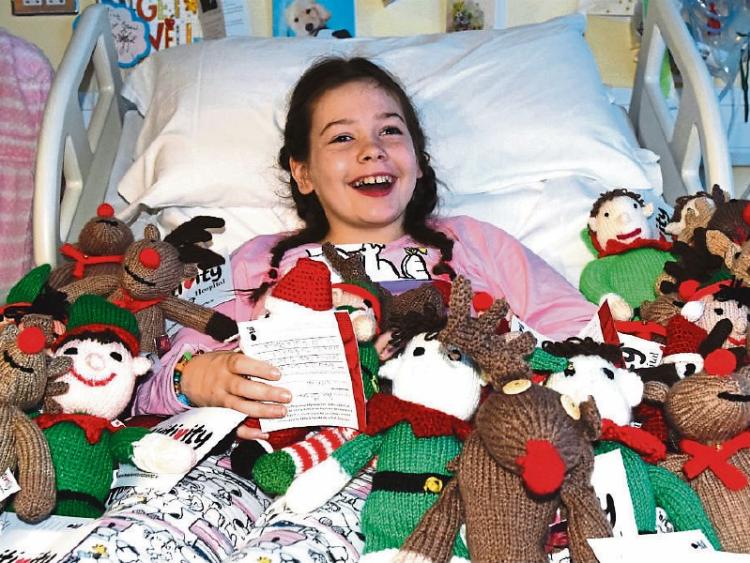 Aine Ryan, from Raheen, at Beaumont hospital with the Christmas characters – Beau the Elf, Monty the Reindeer and Dr Claus – which were knitted by volunteers around the country

A BRAVE Limerick girl who is battling a brain tumour is calling on the people of Limerick to knit Christmas characters in aid of Beaumont hospital.

Ten-year-old Aine Ryan, from Raheen, has already undergone surgery and is now embarking on a journey of radiotherapy and chemotherapy.

“Beaumont is a centre of excellence. Myself and Aine were talking about how we’d like to give something back to the hospital, and we found out about Knitivity,” said Aine’s mother Trish Ryan.

The fourth class pupil at St Nessan’s, Mungret, has been in St Raphael’s ward in Beaumont since September.

After noticing “a little bit of a wobble” in Aine’s walk in late August, Trish decided to bring her to the doctor - thinking that there could be a small problem in her hip.

“I had a gut feeling that something wasn’t right. I never dreamt it would be a tumour, but I took her in to get a brain scan. It was all diagnosed very quickly, thank God,” said Trish.

“The symptoms were very slight – her balance was off very slightly. But you know your own child.”

Seeing her 10-year-old being diagnosed with a tumour is “every parent’s nightmare”, but Aine has had a smile on her face all the way.

Raheen priest Fr Richie Davern, who has been a source of support to the Ryans since Aine’s diagnosis, put the call out at Mass for knitters – and the community has rallied behind the local child.

More than 300 knitters have signed up nationwide – and at least 50 of those are supporters of Aine who have pledged to take up the needles. She’s hoping to inspire even more people to get in touch and knit.

“In fairness to UHL, I couldn’t but praise them. They got us out in an ambulance and they got us to Dublin super fast – they really pulled out all the stops,” added Trish.

The fundraiser invites people countrywide to knit one, or all, of three Christmas characters. The knitted creations will be sold as gifts from the hospital or online at www.beaumontfundraising.ie. Knitters can also sell their characters locally at Christmas fairs and donate the funds raised to the hospital.

“If you would like to get involved, contact Beaumont Hospital Foundation on 01 8092457 or email hello@beaumont.ie to register for the Knitivity pack,” said a spokesperson.