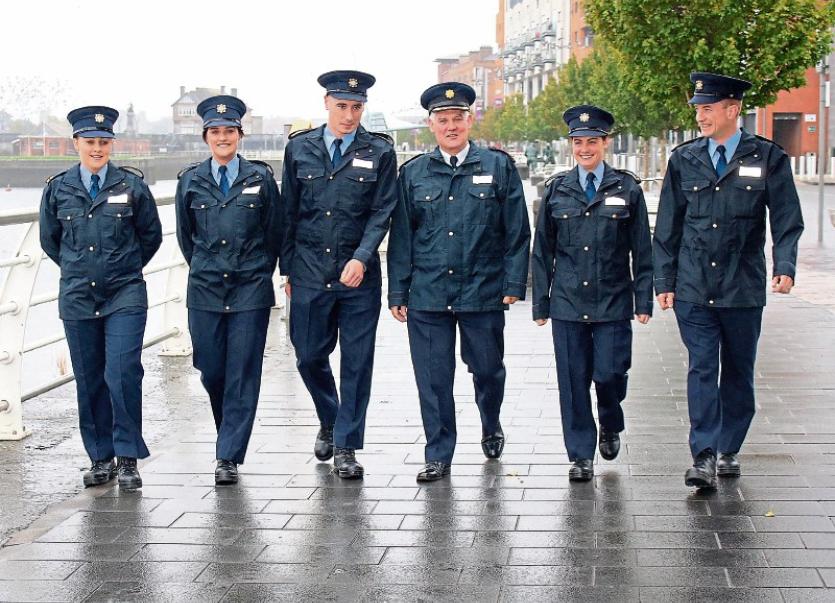 THE BLACK shoes are shiny, the navy uniforms are immaculately pressed and the hats of Limerick’s five newest gardai are tilted at just the right angle.

The five Templemore graduates, who passed out on September 22, were welcomed by Chief Superintendent David Sheahan.

He described the new recruits to the division as “a breath of fresh air” and “like new limbs on a tree”.

Chief Supt Sheahan said the moratorium [on recruitment introduced in 2010] was “very hard on us”. The garda college reopened in September 2014.

“We lost a lot of very experienced and decent people who decided – for one reason or another – it was time for them to retire. For those years we had no one coming in - it was very difficult to try and keep the whole thing going.

“At the same time one of the strengths in Limerick was our ability to be able to bring through people and get them to a high level whereby you could ask them to do anything within the division.

“These new people – they’re like a breath of fresh air. It is up to us to try and develop them and for them to leave the place in a better way than when they started,” said Chief Supt Sheahan, who added that they also got three extra staff on top of the five in the last week.

The Wexford man started just like the five young men and women he met on Monday. He rose up through the ranks and is an assistant commissioner in waiting.

The biggest advice, Chief Supt Sheahan gives, is to “connect with the community”.

“In all my service the one thing that I really enjoyed was getting out and about and connecting with the community. I can remember back to my young days in Dungarvan. I used to walk the beat on a regular basis and there was a woman who had a bread shop. If I didn’t call in there in the morning she would be giving out to me by dinner time as to why I hadn’t called in.

“In many ways that was the core to what I believed in. I have carried that in to all the ranks that I’ve had – it is your ability to be able to communicate with the community which you are in. That was hugely important to me and it stood the test of time. I think we are of the people and we should never forget that,” said Chief Supt Sheahan.

A trait among the four new guards from Cork and one from Kerry is they all would have joined the guards sooner only for the moratorium. Cliodhna Ni Chonghaile will be a huge asset as she is a qualified nurse. She decided that career wasn’t for her but she will be invaluable if she is first on the scene at an emergency. William O’Mahony will have no problem kicking in doors during searches as he has a background in construction.

Mary O’Connor said she always wanted to be a guard.

“I’ve been in college and have life experience. I remember being in primary school, the guards coming in giving talks, going home from school and saying to my parents, ‘I’d love to be a guard when I’m older’. When I heard they were recruiting again I applied for it and I’m delighted it has all worked out,” said Mary.

Michelle Browne said it is a job you will “never be bored in”. “No two days will be the same. That’s what interested me,” she said.

Eoin Sheahan said he has wanted to join the guards since a young age and after finishing college they were recruiting again. “I went for it and thankfully it worked out.”

The newly attested gardaí have a further 16 months of practical and classroom based training to complete to receive their BA in Applied Policing.