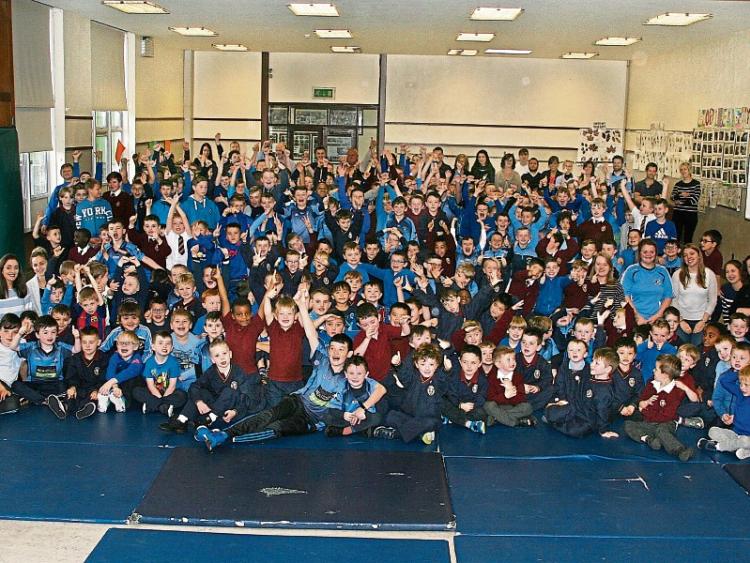 Children at Christ the King National School don Na Piarsaigh’s sky blue jersey, and get ready to cheer on their heroes as who play Kilmallock

THERE is real excitement in Caherdavin that Na Piarsaigh can win the county hurling title for the fourth time in just six years.

Children at Christ the King National School donned the distinctive sky blue shirts of the club this week as they got ready for Sunday’s showpiece at the Gaelic Grounds, throw in 3.30pm.

The school is adorned with flags and sky-blue bunting as teachers and students alike got ready to cheer on their heroes in the hope they can conquer Kilmallock and recapture the trophy they last won in 2015 en route to All-Ireland glory the following March.

Shane O’Neill, the school’s hurling coach, says it is great for the boys to see the way they have progressed in GAA.

“It’ll be great for the boys in the younger classes, first, second and third classes to see their heroes win on Sunday again.

“It will be huge. It feels like every year Na Piarsaigh are in the final. It won’t last forever, so hopefully this team can enjoy themselves and win as much as they can,” he said.

Among the students, there is confidence that the Caherdavin side can topple their county rivals.

Five-year-old Paddy McCaul – whose favourite player is free-taker Dowling – said: “I think it will be 10-0 to  Na Piarsaigh! I cannot wait to see them play.”

Stephen O’Donnell, 13, of Whitethorn Drive, was slightly more cautious, saying: “I think they are going to win, but it will be difficult. I just think they are very good. They play as a team and have all the best players.”

Sean Toomey, 11, Rossroe Avenue, added: “It will be a good match. I think we will put it up to Kilmallock.”

“He used to come to the school, and he is my coach. He does good training with me. I’d love to play for Na Piarsaigh like him,” Ben smiled.

Cian Molloy, 11, of Thomond Village, added: “I think Na Piarsaigh will win on Suinday. What do I think of Kilmallock? I don’t know how to answer that!”

Coach Shane hurls for South Liberties in Ballyneety, but he is happy to say that Na Piarsaigh are his second team.

As the Limerick Leader left the boys’ national school, we were bid farewell by the chant of ‘Na Piarsaigh Abu!’.

Expect to hear a lot more of this on Sunday! Throw in is at 3.30pm, and the game is to be televised live on TG4.