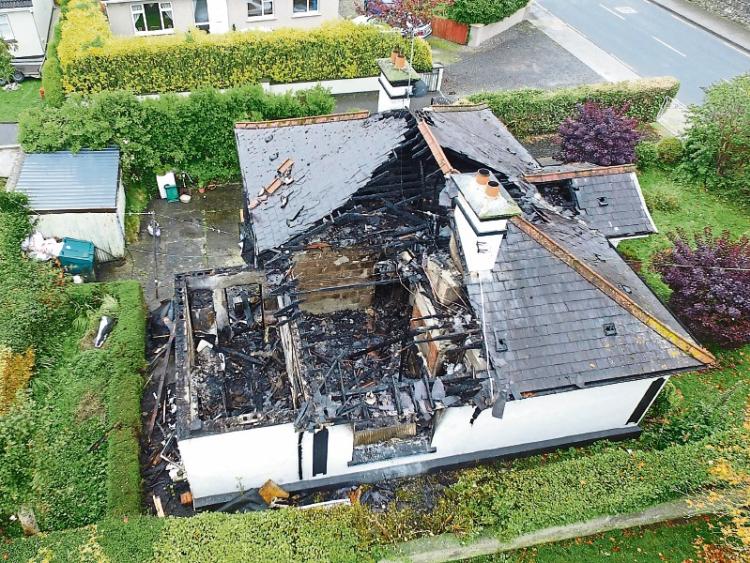 THE COMMUNITY in Croom is ready to rally around an elderly woman whose house was engulfed in flames earlier this week.

The fire broke out at the property on High Street, Croom, at around 11pm on Sunday night. The sole resident of the house, Nora Teresa Fennessy, escaped injury when a neighbour helped her from the burning building.

And her beloved Bichon Frise, Poppy, was also saved from the house.

Reg Turner, secretary of the local residents’ association, said that the community will look at fundraising to support the refurbishment of the house.

“She is okay, and whatever needs to be done, the community will be behind her and do the best they can for her. We are all there as backup,” he said.

While Mrs Fennessy has lost a lot in the fire, her most important possession is her dog, who thankfully also escaped.

One resident said that the small white dog “is her life”, and neighbours are breathing a sigh of relief that both Mrs Fennessy and Poppy were saved.

“She loves that dog. The dog starred in the local play in Granagh last year, the star of the show. It didn’t move a muscle, but it didn’t have to move a muscle. It was like she was trained. The dog would nearly talk to you,” said local councillor Richard O’Donoghue.

“The main thing is that she got out safe. You can replace houses, but you can’t replace life,” added Mr O’Donoghue.

The alarm was raised at around 11pm after neighbours of the pensioner heard a number of loud bangs and saw flames coming from the woman’s home.

Prior to the arrival of the emergency services, flames as high as 30 feet could be seen coming from the bungalow, which is located near Coláiste Chiaráin.

Large crowds gathered on the street for several hours to watch as firefighters tackled the fire in the residential area.

Many onlookers were out in their pyjamas, while others were returning from the local pub when they stopped to witness the dramatic event unfolding.

The fire, which is believed to have originated in the hot press, has caused extensive structural damage to the house. Gardaí are not treating the blaze as suspicious.

While Mrs Fennessy, aged in her 70s, was assessed by paramedics from the National Ambulance Service who also attended the scene, she did not require treatment in hospital.