Screenings urged amid removal of asbestos from Limerick residents' homes 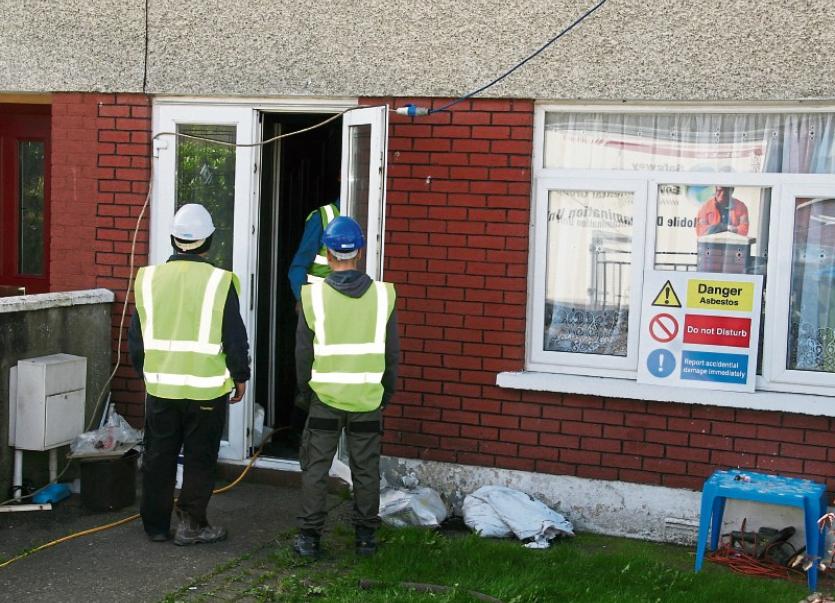 ‘Danger asbestos’: Contractors commence the removal of the material from homes in Moyross this week Picture: Adrian Butler

RESIDENTS continue to express health concerns as experts continue the process of removing asbestos from more than a dozen homes in Limerick city estate.

Contracted specialists at Safeway Environment have started asbestos removal in 16 houses at College Avenue, in Moyross, after concerns were raised about its presence in July.

As a result, residents are being offered accommodation and arrangements have been put in place, a spokesperson for Limerick City and County Council said.

It is understood that one resident was accommodated in a hotel in the city, between 8.30am and 5.30pm, before they were allowed to re-enter their home at 7pm.

And reacting to the removal of asbestos, which is being done at a rate of one house per day, Cllr James Collins has called on the council to facilitate medical screenings of affected residents.

He told this newspaper that the council “urgently needs to health check residents and any maintenance workers who may have been exposed”.

The Fianna Fáil councillor added: “They are currently excluding people from their homes as they remove the hazardous material. They still refuse to answer: How long they knew it was there? Why didn’t they act sooner? Limerick City and County Council’s silence is telling.”

It is understood that one resident requested a safety certificate from the council, once the works are complete.

“They are still worried,” one resident told the Leader this Tuesday. “No one has explained the extent of this, and no one has explained anything in detail. More people knew about this from the newspaper rather than from Regeneration.”

“And maybe the people need a medical examination, for the people who have been living in those houses.”

When asked if the council will be providing medical screenings to residents living in the 16 homes, a spokesperson said: “No, at this present time. Air test monitoring was carried out in these homes and these were clear,” the spokesperson explained. This is in relation to an independent analysis undertaken in the summer, which found that “there are no current indications of any associated health risk”.

Asbestos, used as fireproofing and insulation from the 1950s to 2000, is not harmful if undisturbed.

In an advice sheet to locals, the HSE said that while people exposed to asbestos generally do not suffer any short-term effects, conditions can develop over time.