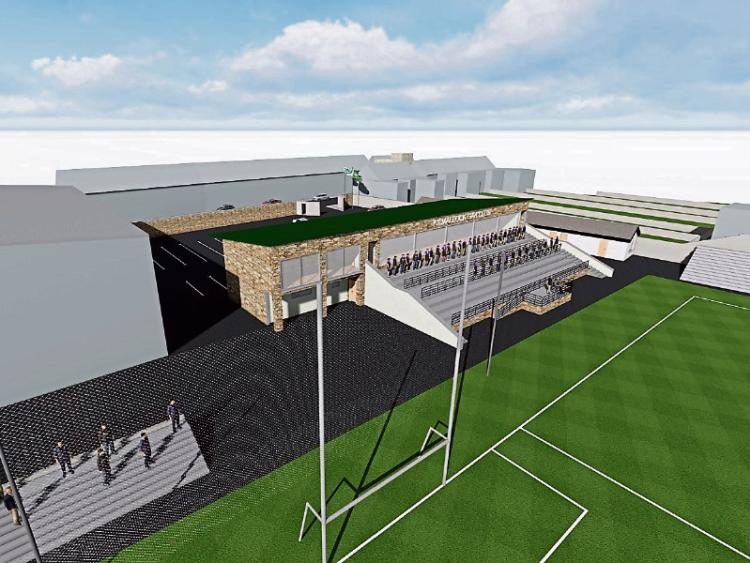 An artist's impression of the new development at Kilmallock GAA club's grounds, which was launched this week

Planning permission has now been granted by Limerick County Council for a state-of-the art new facility on the Kilmallock GAA club grounds.

Those in attendance at the launch at Deebert House Hotel heard details about the five-year plan which it is anticipated will be completed over three phases.

The second phase will see improved facilities for players and members. Dressing rooms will also be included within this phase along with a gym. Function rooms and games rooms are also envisaged for the youth of the town and the greater community.

Phase three, the long-term vision, includes an astroturf pitch, walking track around the grounds and further development of the stands.

“This development is not about change, it’s about progress-bringing our facilities to a new level for the benefit of all,” said Steven Connery, chairman of Kilmallock GAA club.

Jimmy Millea, the club’s life president said: “The contribution of generations of Kilmallock GAA people have put the club, the town and its people to the forefront both locally and nationally and it is my dear wish that this should continue for generations to come.”

Funding for the development is being sought from Sports Capital Grants, The Munster Council, players past and present, club members and all involved with the Kilmallock club and community.

As an acknowledgment of support for the development the club will include the following: club membership for a two year period, your family name or your name on a plaque within the pavilion acknowledging your support of the project and free gym membership in year one.