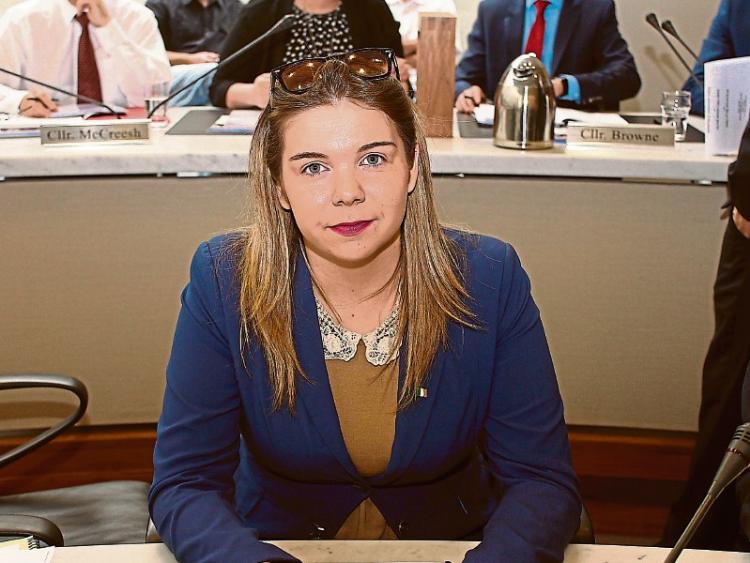 LIMERICK City and County councillor Lisa Marie Sheehy has resigned from Sinn Fein stating that the party environment is “hostile and toxic” and claiming there is “an alarming increase of intimidation within the party which amounts to nothing short of bullying”.

The youngest female public representative in the country stated that she was “plotted against” and pushed out of the party by a small number of members within who tried to break her down.

The 23-year-old who was elected on the first count in 2014 after a three week campaign said she has been positive throughout her term to make a real difference in her community but claims that she “has been undermined and bullied by members of the party” which started to have an affect on how she was fulfilling her role. She stated: “I’m interested in getting things done in my area for the people who elected me and not engaging in bullyboy politics.”

The UCC politics graduate stated that she made a complaint to the party organisers in recent times in relation to the way she was being treated and in regard to incidents that occurred at official meetings. She claims that an investigation was conducted through the party structure of the cuige which consisted of organisers interviewing both her and other persons involved individually.

The Glenroe-based councillor said she felt “the investigation was a joke” and was merely offered “as a protocol to state that it had satisfactorily dealt with the complaint”.

However, Cllr Sheehy was not happy that any of her valid issues were taken seriously.

Cllr Sheehy said that in an email, the Chairperson of the Ireland South Cuige, David Cullinane TD responded: “It was decided that no evidence of wrong doing was presented that merits further action”.

Cllr Sheehy stated that she had consulted widely with other Sinn Féin councillors throughout the country who themselves she claims “have faced hostility from within the party and all of them have no faith in the sham process being used to investigate bullying within the party.

“Thus far, the party has been seen to only protect themselves and the bullies instead of protecting the hard working councillors and members who have given years of service to Sinn Fein.

“My resignation will not be the last from Sinn Féin,” she stated.

“I cannot stand behind a party that does not take its membership’s valid concerns seriously. If we look back at the people who have left the party or decided not to run for re-election due to bullying within the party it’s disheartening and disgraceful and Sinn Fein has not learned its lesson.

"I have no respect for the party anymore as I have been undermined, bullied and humiliated. Since I have been elected I have tried to fulfil my duty as a public representative to the best of my ability and during that time I have been consistently and frequently belittled by party members and after seeing a number of other members wronged by the party and nothing of substance being done about it I could not stay any longer.”

The youngest female public representative in the country concluded that she had started to distance herself from the negativity in the party in the past few months and that she was now going to continue to represent the Cappamore / Kilmallock area as an Independent councillor.

“I love my role in the community and I am very proud of my work thus far and I look forward to make a clean break from a hostile and toxic environment. I value my work and I have parked my feelings to the side for too long.”