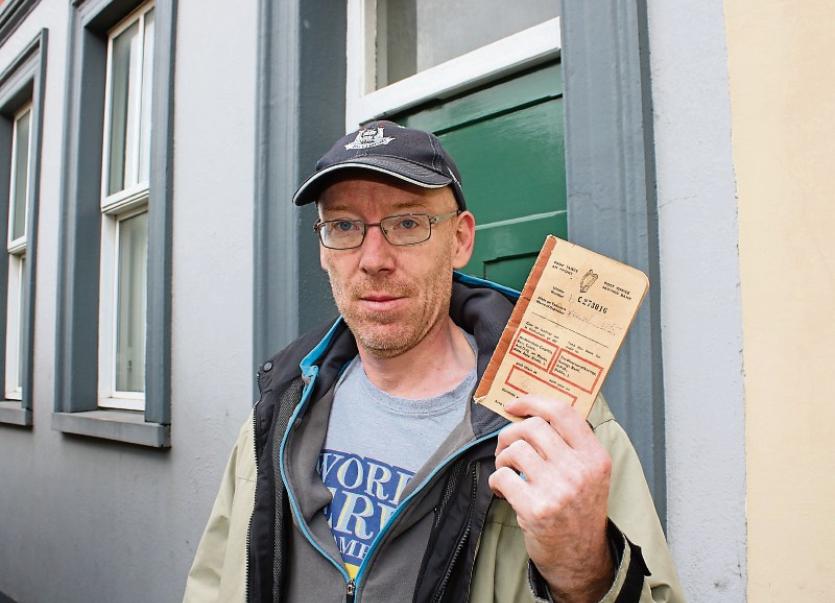 IT MAY only be a tattered old post office savings book with just 76p in it...but it has has a value that is incalculable.

It accounts a family’s story of murder, births, road deaths and love. It was opened by Tadhg Hanrahan, postmaster of a sub-office in Alphonsus Street, long since gone. The year was 1970 and his grandnephew Don Mac Coitir was celebrating his first birthday. As a present, Tadhg, who was 53, opened the savings book and put two pounds in it - a lot of money at the time.

Two years later Tadhg, a single gentleman, was murdered in the post office. According to newspaper reports at the time, on December 21, 1972 he was “stabbed and beaten up”.

“It is understood that in addition to being stabbed Mr Hanrahan was also struck with an iron bar several times,” they read.

Don’s mum - Siobhán - grew up in the same house as Tadgh and described her uncle as “the light of my life”.

On the day his life was brutally ended, Siobhán was in the National Maternity Hospital giving birth to Deirdre - a sister to Don and one of her 11 children.

“My husband, also Don, came to see me that evening and there was something wrong. He wasn’t particularly interested in the new baby, he was so glum. I said, ‘Come on, we’ll go down and watch the news’ and he said, ‘No, no we’ll stay here’.

“The next day I got a phone call from my friend who lived in Shannon and she said, ‘I’m awfully sorry to hear about your uncle Tadhg’. All my friends knew him - he was so good to everybody. I said, ‘What about Tadhg?’ and she hung up the phone. I knew then things weren’t good and my husband told me. They were trying to protect me,” said Siobhán, who is in her early 70s.

She sits down in Dolan’s along with her son Don and daughter Siobhán - twins and recalls the tragedy. Around the corner is Alphonsus Street where she spent her youth with Tadhg. Despite an over 20 year age gap, her uncle was more like a brother and the memories come flooding back.

“He was the light of my life. He brought the laughs into my life. Before taking over as the sub-postmaster from his mother Madge he used to work for the Limerick Steamship Company. He never went away without bringing me back something. I used cry every time he went away and he could only be going to Liverpool. His death was devastating,” said Siobhán, who had moved to Dundrum in Dublin.

The family was beset with more tragedy when Deirdre - born on the day Tadhg was murdered - and her newborn daughter Liadán were killed in a car crash in 2001.

Her brother Don said there is a tragic “poetic symmetry” encapsulated in his post office book.

“Tadhg was murdered on the day my younger sister was born, who was then killed in a car crash years later. It is pretty heavy upheaval - violent death, birth on the same day, that daughter dying. The fact that Tadhg opened the savings book to mark my first birthday and I still have it today...

“It was such a warm and thoughtful gesture. Normally when you have a savings book you don’t know the person who opened it is from Adam - the bank clerk or post office clerk or whomever. This is my flesh and blood who put his stamp and signature on the book,” said Don.

His mother says Don did meet Tadhg but as he was a tot he has no recollection. The savings book was found when he was 15 or 16 and like any teenager the first thing he did was go to see how much it was worth.

“They updated it into punts from pounds, shillings and pence and I had £4.48. I used it for a couple of years before going to Germany where I now live,” said Don.

When he packed his bags at 18 he brought the savings book with him. Despite his tender years he knew there was something special about it.

Don found it again recently and after almost 40 years Don returned, with his mum and sister - the two Siobháns, to Limerick and Alphonsus Street where his granduncle opened it decades ago.

“I’m 48 and it is almost as old as I am. Normally it will get filled up and the clerk will cut off the corners and open a new one. Because I went to Germany it wasn’t used.

“It is the old style ledger with pounds, shillings and pence. When they updated it when I was a teenager they didn’t bother issuing a new book, they just put a line through the irrelevant columns and put in punts and pence.

“When the euro was introduced I thought a savings book with three currencies - now that would be something. Then Deirdre had the accident and I forgot about it. I don’t even know why I found it again recently. Tadhg is one of my names and one of our nephews is called Tadhg. His name has definitely lived on,” said Don.

As it has, literally, on his savings book. Don plans to contact An Post to see if he can get Euros added to it. Then a ledger started by a man, who was murdered in a post office that no longer exists, is still viable and alive today.

They would really sum up Tadhg Hanrahan’s kind gesture for his grandnephew’s first birthday.