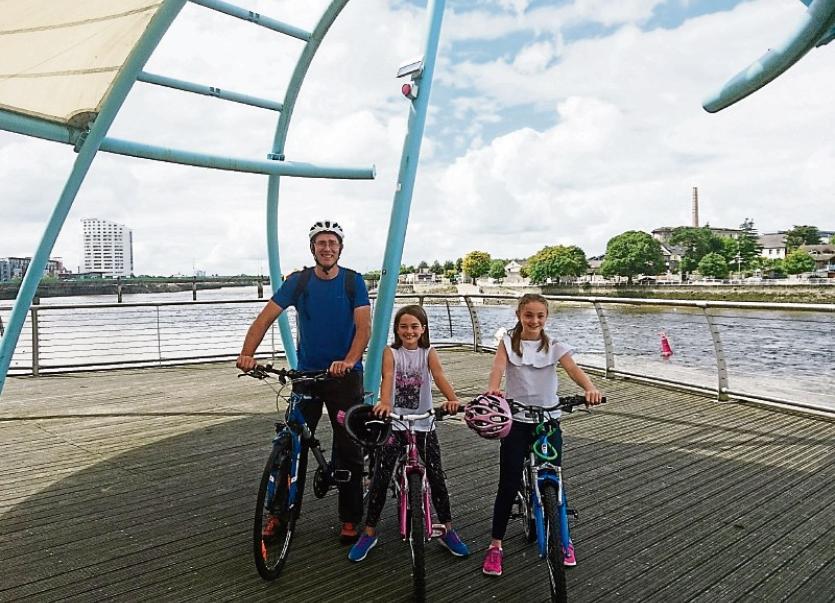 James Powell, Newport, and daughters Emily and Lucy were all smiles on a visit to Limerick city before their bikes were stolen

A DAD and his daughters dream day out in Limerick ended in tears when their bikes were robbed – two were presents from Santa.

On Bank Holiday Monday, James Powell, Newport, brought two of his girls - Emily, aged 10, and Lucy, 9 - to UL. They did the “lovely cycle” into the city and locked their three bicycles on the boardwalk outside Milano’s. They dined in the restaurant before going to Eason’s for school supplies and hot chocolates.

“So far so wonderful. Unfortunately there was an empty railing where the bikes used to be [when they returned]. A man crossed the road to us from Milano’s, told us that he had seen it happening, contacted gardai straight away and gave them a full description.

“We went up to Henry Street Garda Station and gave a statement. We were given back one of the bikes, the chain had jammed and one of the thieves threw it down outside House Limerick. A very obliging staff member, Adam I believe, had brought it up to the garda station. When I asked if any gardai had gone out to catch these thieves I was told there was ‘nobody available’,” said James.

This crime occurred in the middle of the day just around the corner from the main garda station in the region, he says.

“The crime was reported as it was happening, and yet there was no garda available to stop it? From my understanding, the thieves would have cycled right past the back door of the station, and yet there was nobody free to step outside and stop them? My feeling at the time was despondency, but as time has passed it has turned to rage.

“It angers me that one of the busiest garda stations in the country didn’t have the resources to either prevent the crime or catch the criminals when it happened on its doorstep, was witnessed by dozens of civilians, and was reported while it was happening,” said James, whose bike cost €800.

And a nice day out was destroyed.

“Lucy was very upset and was crying a lot. Emily was singing so I thought she was taking it very well, but she told me later that she was singing to stop herself from crying.

“The walkway where we left the bikes is a credit to the city, a beautifully constructed and presented area. I feel that it is a shame that we will not revisit this boardwalk, my children will not want to spend time in the city. That area has such great potential to draw tourists from near and far, but not when these things are allowed,” said James.

A garda spokesperson said they are unable to comment on correspondence by a third party.

“It appears from the complainant that this matter has been reported and is currently under investigation. Local garda management closely monitors the allocation of all resources, in the context of crime trends, policing needs and other operational strategies in place on a district, divisional and regional level, to ensure optimum use is made of garda resources, and the best possible garda service is provided to the public and this situation will be kept under review,” said the spokesperson.