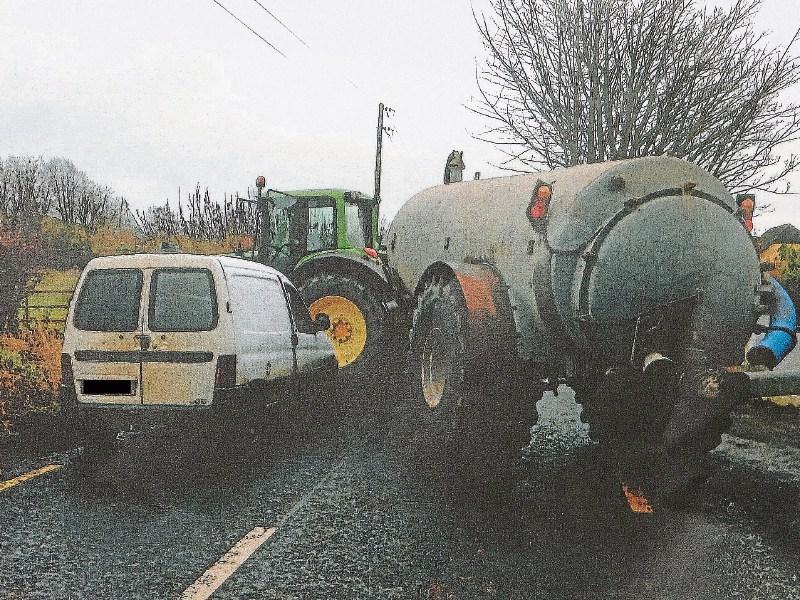 THE driver of a van which collided with a tractor and slurry tanker was acquitted of careless driving after a judge found the State had not reached the necessary threshold to prove its case against him.

Denis Aherne, aged 40, of Cloughadoolarty, Fedamore was prosecuted before Limerick District Court following an incident on the R511 at Friarstown, Crecora on December 21, last.

During a lengthy hearing, Judge Marian O’Leary heard from several witnesses including a number of agricultural contractors.

The driver of the John Deere tractor, Brian Relighan, told the court he had drawn a “fully-loaded” slurry tanker from Clonlara and was performing a manoeuvre to turn into a field on the left hand side of the road when the collision happened.

He said he was travelling at around 40kph and slowed to a “crawling pace” as he attempted to perform the manoeuvre.

He said he saw a white van “a good bit behind” in his mirror and that this vehicle “came into the rear wheel of the tractor” as he turned left.

“It wasn’t a heavy collision, I didn’t feel it,” he said adding that the nose of the tractor was “nearly in the gap” when the impact happened.

Mr Relighan told Sergeant Donal Cronin that had he not slowed down considerably before turning left he would have “flipped the whole thing”.

Later the court heard evidence that a combination of the clutch and the brakes are used when slowing a vehicle the size of a tractor..

While Mr Relighan claimed he heard the screeching of brakes before the impact, no evidence of brake marks on the road was produced during the hearing.

Cross examined by solicitor Darach McCarthy, the witnesses disputed he had “completely vacated” the lane in which he was driving before attempting to perform the turning manoeuvre.

However, when photographs - taken by the defendant on the day - were produced he accepted that he had done so.

Mr McCarthy suggested Mr Relighan’s driving had contributed to the collision and that he had not noticed his client’.

“You were ploughing along, you got your speed up and you turned right before swinging round to go in. You didn’t stop until you were hit,” he said putting it to the witness that his client believed he had pulled in on the opposite side of the road.

“All of a sudden you whipped (back) into the laneway. You frightened the life out of him,” he said.

Before calling his client to give evidence, Mr McCarthy applied to have the case dismissed submitting there was a “fatal flaw” in the State case as both the court summons and the evidence of the witnesses suggested the collision had happened at Friarstown, Grange and not Friarstown, Crecora.

However, Judge O’Leary ruled the defendant had not been prejudiced by this and that there was no doubt as to where the collision had happened.

In evidence Mr Aherne said he was “just popping back out to Fedamore” when he came upon the tractor and tanker.

He said the road was a little greasy and that he could not overtake the tractor due to the speed limit outside Roxboro NS.

He said when the tractor “went completely over to the other side of the road” where there are a number of houses he assumed it was going to stay there.

He told the court there was “no indication left or right” and that he would have stopped had the tractor driver indicated.

Judge O’Leary was told the impact was minimal and that the only damage caused was a cracked headlight and a pinched radiator.

Mr Aherne said he beeped his horn following the impact as he was concerned the driver of the tractor had not seen him and might pull the tanker over his Citroen Berlingo.

Being cross-examined by Sgt Cronin, the defendant denied he had “made a miscalculation” and that the collision was due to a lack of concentration on his part.

“Wasn’t it highly imprudent of you to try to undertake him?” asked Sgt Cronin who suggested Mr Aherne has “decided to run the risk”.

Sgt Cronin put it to the witness he had committed an offence by failing to drive in a manner which enabled him to stop within a safe distance.

“I was in my laneway, it was completely clear,” said Mr Aherne.

Delivering her ruling, Judge O’Leary said she was satisfied there had been a “momentary lapse” in concentration but that this, in itself, was not sufficient to convict the defendant of careless driving.