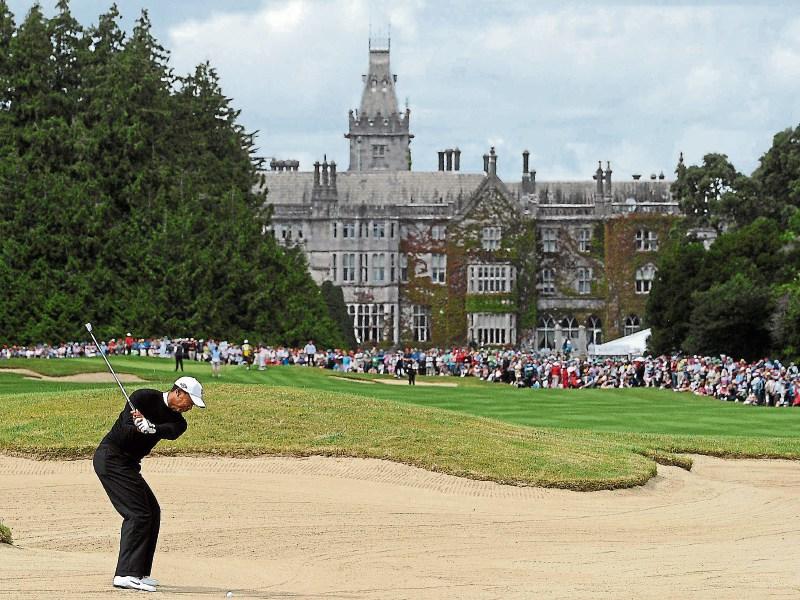 THE WORLD’S top golfers will be able to sink pints as well as putts during the JP McManus Pro-Am at Limerick's Adare Manor in 2020.

If their driving is askew they can enjoy a “straightener” in between the ninth and tenth holes thanks to a new bar licence granted this week.

It is hoped Jordan Spieth and the world's top golfers will be among those to tee it up at the charity pro-am. JP McManus and his team are working hard behind the scenes to attract the best players in the world, as well as celebrities, to County Limerick in July 2020 and possibly to the Ryder Cup in 2026.

Senior counsel Derry O'Donovan instructed by Brendan Gill, solicitor, applied for the current alcohol licence to be extended to cover the expansion of the hotel. It includes a new luxury 42-bedroom wing and a ballroom with capacity for 350 people.

Owned by the McManus family, it is understood many multiples of the believed purchase price of €30m has been spent on transforming the hotel and golf course. The renovations include a state-of-the-art corporate boardroom, revitalising spa, a brand new swimming pool and even a cinema

The extension of the current licence was granted by Judge Tom O'Donnell.

At the same court sitting, Bill O’Donnell, solicitor, asked for the pub licence of The Weigh Inn in Ballysheedy to be extinguished.

Mr O'Donovan, representing Tizzard Holdings, applied for the Weigh Inn’s licence to be transferred over to Adare Manor. It is understood this is for The Carriage House restaurant, formerly the clubhouse.

Previously, the licence was for a hotel as there were rooms in the building. Following renovations there is no accommodation and a pub licence was required.

Judge O'Donnell granted all applications and wished the new enterprise “every success”.

The hotel held a recruitment drive to hire 170 extra staff this month and now they have the alcohol licences for them to serve the finest Dom Pérignon, Glenfiddich or Rémy Martin to guests.

The on course Halfway House was also licenced for refreshments so instead of waiting for the traditional “19th hole”, golfers can now quench their thirst during their round of golf.

It is yet another box ticked ahead of the grand opening in Autumn. The Adare Manor website says: “It will be worth the wait.”

As will the pro-am in three years. The tournament, last held in 2010 raised more than €100m for charities in the Mid-West as well as attracting the world's best golfers and A-list stars to County Limerick.