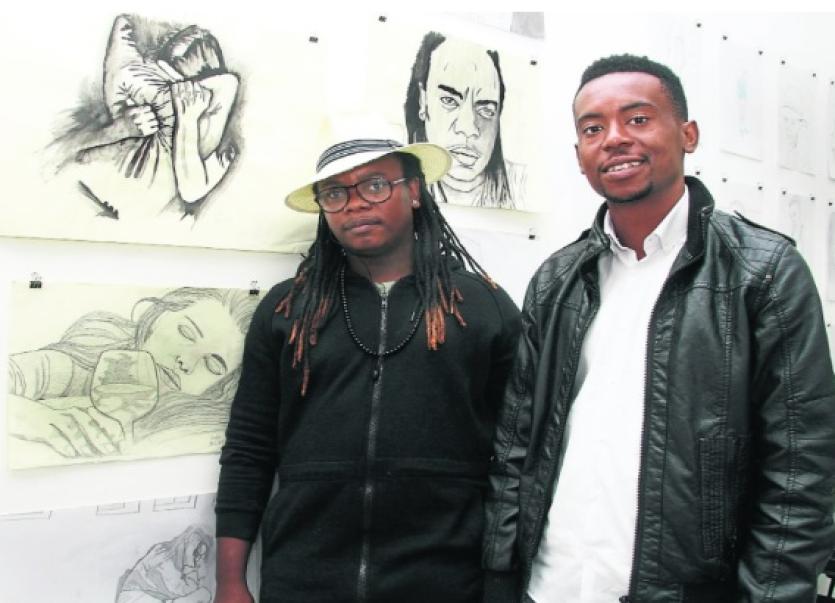 ASYLUM seekers in Limerick are using art as a means of staying sane and expressing their feelings of depression at living in the “open prison” system of direct provision.

An exhibition of drawings and paintings reflecting the bleakness of their current situation and their hopes for the future are now on display in the Belltable on O’Connell Street, until this Saturday.

Entitled ‘I am an asylum seeker but...’ the project in collaboration with Limerick Printmakers, was designed “to aid them in expressing their feelings on living in Ireland in a visual way.”

The residents in Knockalisheen centre, on the Limerick/Clare border, worked for months with Belfast artist and activist Joanna Thompson, who said “while they are currently asylum seekers, that does not define who they are.” 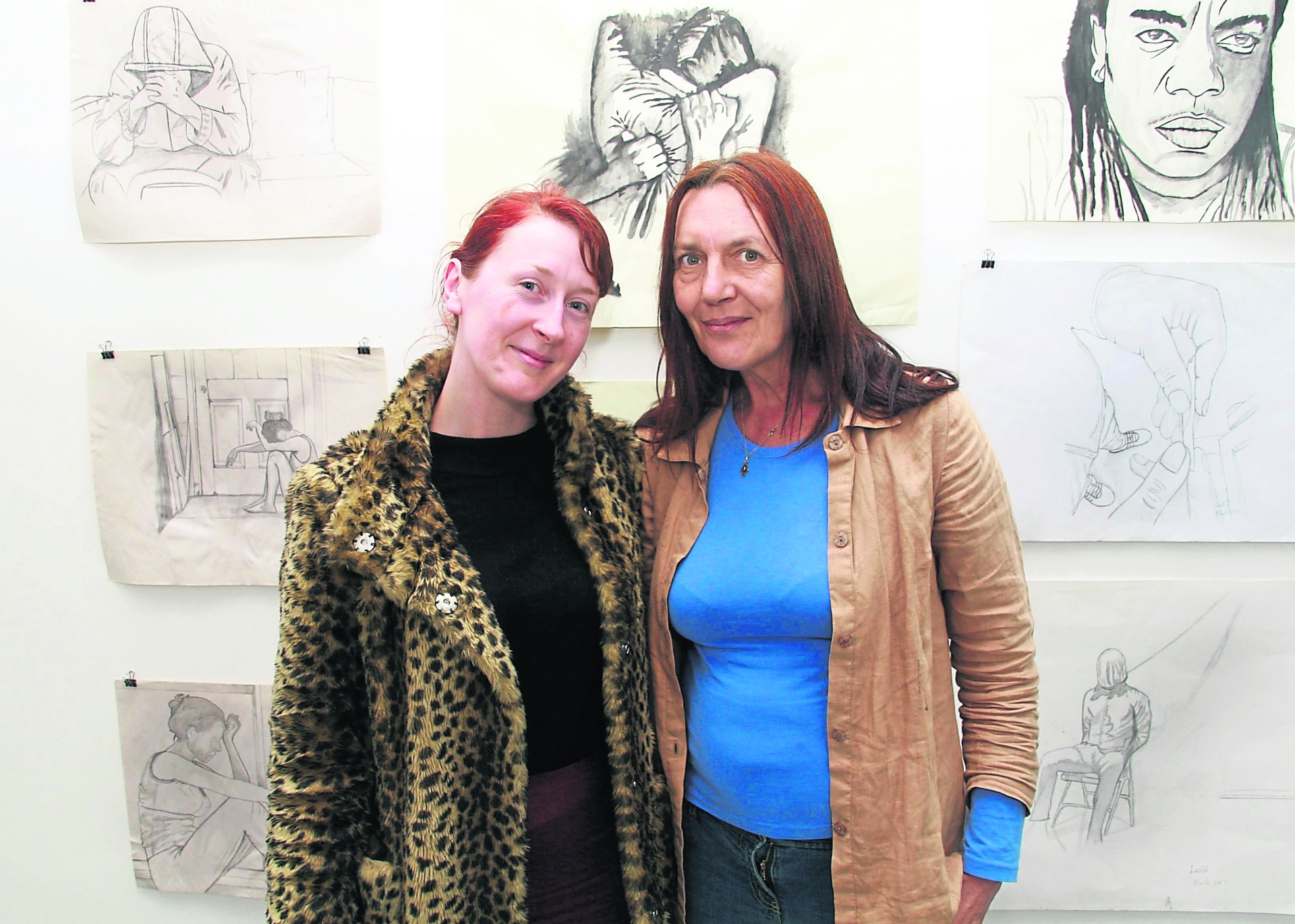 Vincent Pikamu, 25, who worked in the past as a dj, songwriter and fashion designer, harbours hopes of being reunited with his two-year-old son Calvin, who is in South Africa with his mother, whom he was forced to leave at seven months.

“I painted the picture of the playground in Knockalisheen because every time I look at it, I think of him and wish he was here and I was playing with him. Maybe then I wouldn’t be saying that the time is too long or too much for me. Time would mean something different then. I keep praying that I'll get my papers and that we'll be reunited.”

One of his images shows a man with his arms handcuffed, with the caption ‘Freedom’, which he said symbolises his life as he awaits refugee status, after living here for two years. 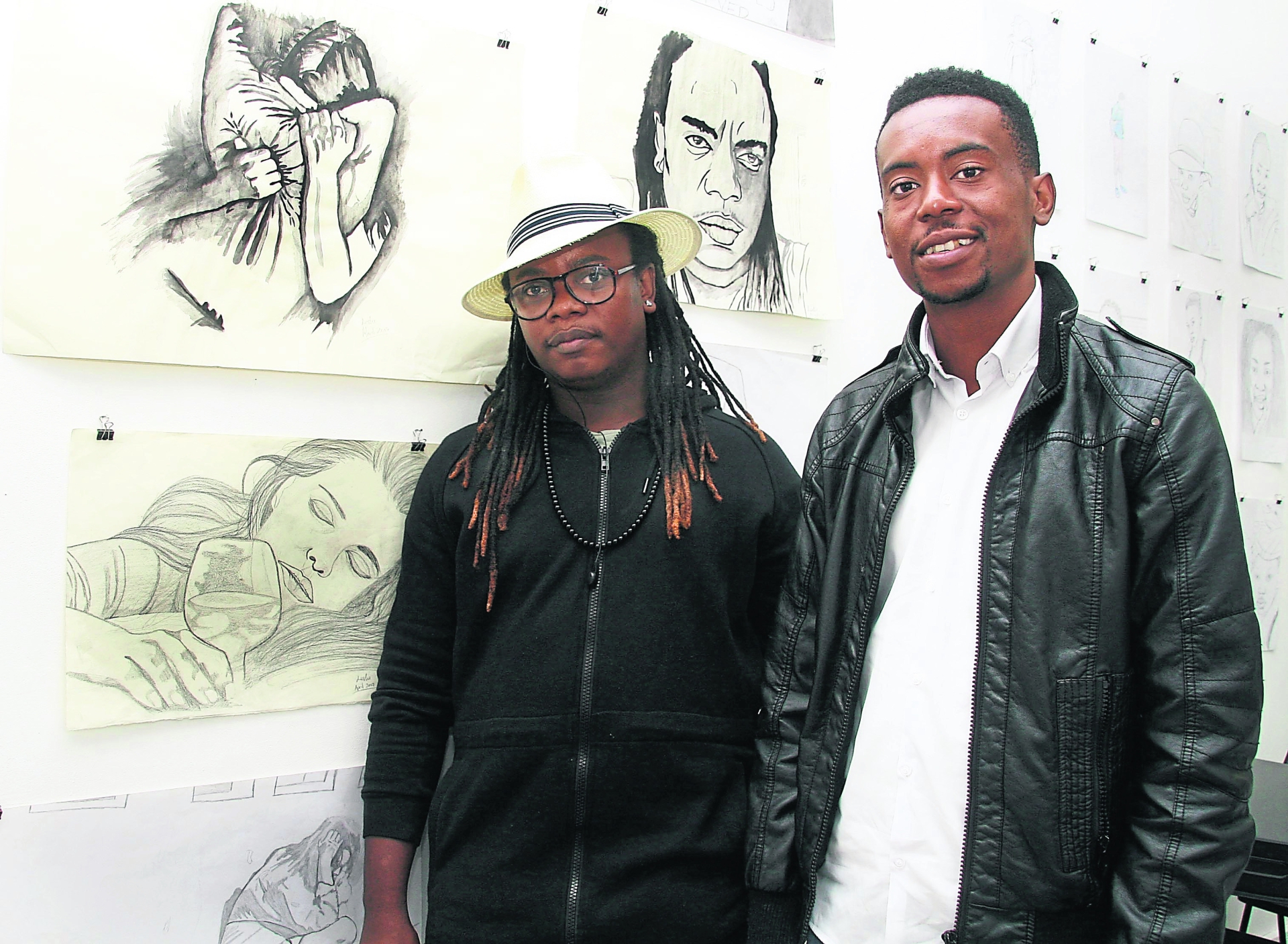 He is hoping to study at the University of Limerick, under the newly announced ‘sanctuary scholarships’, which includes a course-fee waiver, and subsistence towards travel, printing, and IT requirements.

He will be applying to study aircraft maintenance next year, after completing a introduction to the programme in Limerick Institute of Technology this year.

“I’m waiting to receive my refugee status, and I just pray for that. Our brains have been programmed to just think about food and sleep; we can’t do much in the system. The time is very long, and integration is hard for us, because we are far from the city and the buses are not regular.”

Another Zimbabwean resident in Knockalisheen, Leslie, who does not wish to reveal his surname, will be in the direct provision system for four years next month.

A graphic designer, he said he has shared rooms with men who were pilots and others who have PhDs, but fear their talents are being lost and not recognised while they remain in a state of limbo in Ireland.

“Being in the system is frustrating and depressing. We’ve been in the system so long, you just cope. I'm lucky because I have my music and my art, for somebody else it’s quite different. I draw for myself because I am either bored or stressed out.

“Most of my drawings are about depression, because that’s what I see in the hostels. I don’t practice every day, and sometimes I fear the talent is going away,” said Leslie, who hopes to study music production or multimedia in UL.

“It’s hard to live on €19 a week – it’s not enough for transport to get you out of Knockalisheen. You cannot even go on a date with €19. Asylum seekers don’t know what’s going to happen in the next 24 hours; tomorrow you could be deported.”

Knockalisheen resident Busani Moyo, 23, also from Zimbabwe, is one of 17 people who has been offered a life-line by UL in being accepted for a sanctuary scholarship this September.

“Apart from studying and watching documentaries there is nothing much else to do, apart from eat and sleep. I try to stay mentally stable, but I’ve lost trust in my skills.

“Getting the access course to study humanities in UL has boosted my self-esteem. I couldn’t be more happy about getting a place; it will help keep my mind occupied.

“Direct provision is like a different kind of prison. To me it’s like an open prison; it’s Guantanamo Bay where you can go in and out.”

He and others were forced to move to Knockalisheen in January after the Westbourne centre on the Dock Road in the city was shut down.

“We had single rooms [in Westbourne], we have privacy, the food was good and we were close to the city centre. Knockalisheen is more isolating. We can’t afford taxis to go out at night when there are no buses. It’s very hard to survive on €19 a week. I’d like to think that I’ve adapted a bit in a non-adaptable situation.

"All I can do for the moment is to try to keep myself busy.”