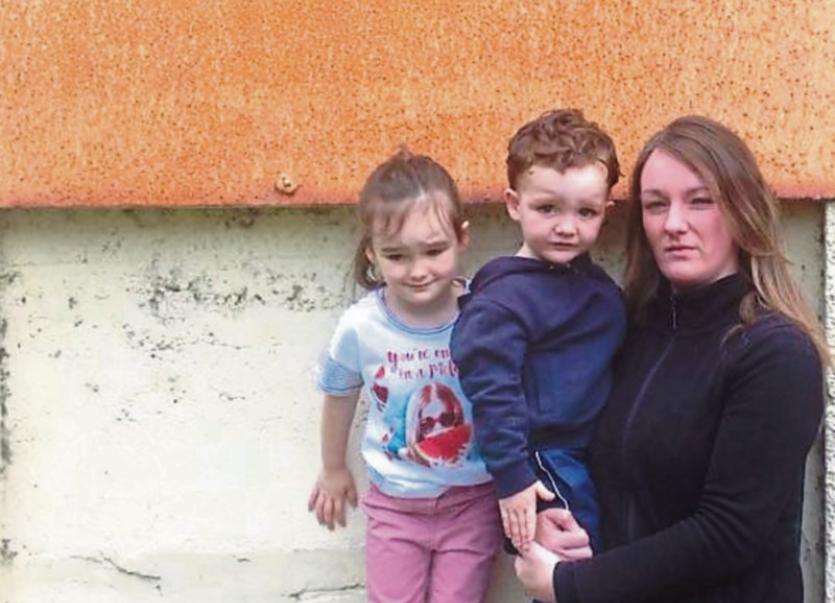 Stephanie Kelly with her children in Ballynanty

A LIMERICK father with an acquired brain injury and his family are facing homelessness for a second time in two years, his concerned wife has said.

Mother Stephanie Kelly, 32, told the Limerick Leader that she is “desperate” to secure a home for her family, as they face being without a home in six weeks’ time.

She said that, after securing a home in Ballynanty through Focus Ireland, the organisation has decided to not renew a contract due to ongoing serious safety issues.

In 2016, the Kelly family were forced to live in B&Bs and hotels for five months, after their landlord of five years decided to sell their house on Fr Russell Road.

Her husband Michael, 42, has been suffering from a brain injury since August 2010. While she works, he is the stay-at-home father for his two children, Hayleigh, 5, and three-year-old Jake.

Ms Kelly said she was previously able to secure a property after working with the Homeless Action Team and Focus Ireland. She said that being homeless was a distressing time for her children.

She said that she was forced to go on sick leave while she was homeless.

“I don’t want to be out of work again. It is so stressful. I have been suffering from anxiety a lot, and my husband has a lot of health problems from his brain injury. He gets a lot of seizures, and the stress is on him as well,” she added.

She said that she has been told by an electrician that the home “is not safe for me and my children”.

Ms Kelly told the Leader that she has approached Limerick City and County Council, but has been told that “there is nothing for us”.

She said that she has been refused a mortgage application three times.

“I was hoping at this stage of my life to be married, have children, and that I would have my own house with my own mortgage by now. I am desperately looking for a family home for my children. I don’t want my children to be homeless for a second time in their short lives.”