Limerick man Christy's model garden is the wonder of the locality

Spudgate: Christy has it all sorted 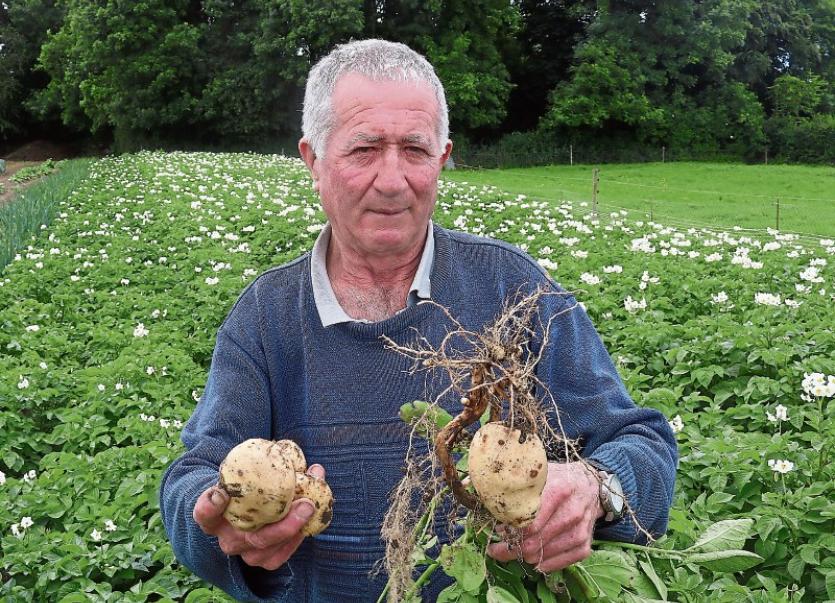 Christy Mulcahy shows off some of his spuds from his vegetable garden in Broadford Picture: Michael Cowhey

CHRISTY Mulcahy knows more than a thing or two about potatoes. He has 12 drills of them set in his garden in Broadford this year: that’s 720 yards of potatoes or just short of half-a-mile of spuds.

In addition, he has 60 yards of onions as well as cabbage, carrots, parsnips, turnips and beetroot and he’s about to put in some lettuce. And it’s all there, for anyone passing to see, on the side of the street in Broadford.

“It is the only vegetable garden around,” Christy says, adding that passers-by or those going in and out of the adjacent doctor’s surgery, often stop for a chat.

Christy has been looking after his garden for at least half a century. He took over from his father, he says, and it has kept the family in produce down through the decades. Now, his surplus is taken up by neighbours keen to get fresh vegetables and by the local community creche and day care centre. In Broadford, from garden to fork is a very short journey.

His secret is a combination of know-how gleaned over the years and a lot of stable manure. But the weather so far this year has not been the best for growing.

“April was bad for growth and May was too dry,” he explains. “You need a wet and windy May.” Now, he adds: “The garden is as dry as the road.”

Christy worked in construction for much of his working life but is now officially retired. But, he adds: “There is no such thing as retired. We have to eat.”