'A great day': Leo's call makes all the difference for Limerick's Patrick O'Donovan 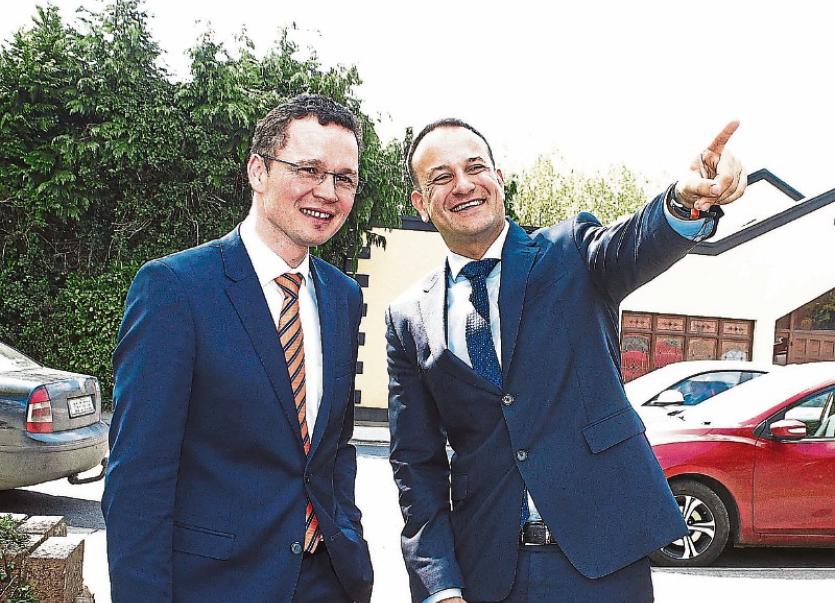 THE call came early on Tuesday morning, the call that Patrick O’Donovan and all his family, friends and supporters had been hoping for.

The new Taoiseach was on the line, telling him he wanted to appoint him as Minister of State at the newly merged Department of Finance and Public Expenditure Reform.

“I didn’t really hear anything else,” the new Minister of State revealed.

But hours later, when the waiting for the official announcement was finally over, he admitted: “It is a big elevation for me. I was a bit shocked this morning. I hadn’t had any formal communication with him up to then.

“It’s a great day. I am delighted to be honest about it,” he declared.

And he was also pleased to hear from former Finance Minister and party colleague  Michael Noonan.

“He was one of the first to ring me and wish me well. He said I would be pretty busy,” Minister O’Donovan said, before going on to pay tribute to his mentor and fellow Limerick man.

“From the day I went into the Dail, Michael Noonan took me under his wing, more so being a West Limerick man than anything else. His advice is and will be very important,” he said.

Very shortly after the announcement of his appointment, the new Minister of State had a brief conversation with his new boss, Minister for Finance and Public Expenditure, Paschal Donohoe.

“I am delighted to be working with someone like Paschal,” Minister of State O’Donovan said. “I have great time for him, a young man with a huge responsibility.”

He had come to know Paschal Donohoe quite well, he said. “We both worked in the same company, Proctor and Gamble,” he explained. “We went in in different ways but we came out the same and got into politics.”

Patrick O’Donovan’s formal political life began with Young Fine Gael, of which he became national chairman. And it was while in college that he first met fellow Fine Gael member  Leo Varadkar, whom he supported in the recent Fine Gael leadership contest.

“We started at the same time.” Both were elected to the Young Fine Gael executive  at the same time in 1998, but it was Patrick who became the national chairman. They were both elected councillors on the same day in 2004. Leo Varadkar went on to be elected a TD in 2007 while Patrick was elected on his first attempt in 2011 and was re-elected in 2016. “We were always friends. We were good sparring partners too. He was from Dublin and I was from the country.”

However, he said, he neither sought nor received any promise of preferment in supporting Leo Varadkar for leader and after for Taoiseach.

In his first term as a TD, Patrick O’Donovan served on the Joint Oireachtas Committee on Transport & Communications, the British Irish Parliamentary Assembly and the Public Accounts Committee.

Last year, he was appointed Minister of State for Tourism and Sport, a role in which he argued for gender quotas on sporting ruling bodies and in which he also emphasised the need for counties like Limerick to receive greater levels of assistance in the promotion of Tourism.

“It is a big elevation for me,” he said just hours after his appointment. He was delighted and honoured to be asked by the Taoiseach to take on the role, he added, particularly as he is now the only minister from Limerick in the government.

But the Fine Gael TD for Limerick county has rejected any suggestion his appointment is a sop to Limerick, following Michael Noonan’s retirement as Minister for Finance.

“I don’t think so. I certainly hope I wouldn’t be regarded as a sop,” he said, pointing out that he had earned his stripes on the job, having served on the Public Accounts Committee and the Joint Oireachtas Committee on Transport and Communication before being appointed Minister of State for Tourism and Sport following last year’s general election.

Minister O’Donovan is generally regarded as having done well in Tourism and Sport. He kept a cool head during the controversy over tickets at last year’s Rio Olympics and opened a national debate on gender quotas on sporting bodies.

But latterly, he was forced to challenge his senior minister, Shane Ross, over his (Ross’s) failure to spell out O’Donovan’s particular responsibilities.

However, he expected the new job to be a challenge, particularly given the issues that the department will face over Brexit, the next budget and the ongoing talks on public sector pay. “It is exciting,” he said.

He also accepted that his new position would see him going out to bat for the government on different, and often contentious, issues.

However, he said decisively, he would have no problem doing that.

“I have never shied away from standing up for whatever  I think is the right thing to do. There is no point in being in politics unless you are prepared to stand up for what you believe in.

Minister O’Donovan will be one of two Ministers of State (Michael D’Arcy is the other) working under the new Minister for Finance and Public Expenditure and Reform, Paschal Donohoe.

And he will have special responsibility for procurement, open government and egovernment.

And while he has yet to discuss the details of his role with his new boss, Minister O’Donovan pointed out that the Programme for Government involves a lot of reform, both at government and structural level and in connection with services and access to information.

Prior to becoming a TD, Patrick O’Donovan qualified and worked as an industrial chemist before then becoming a primary school teacher.

He is married to Eileen Keary and they have one son.