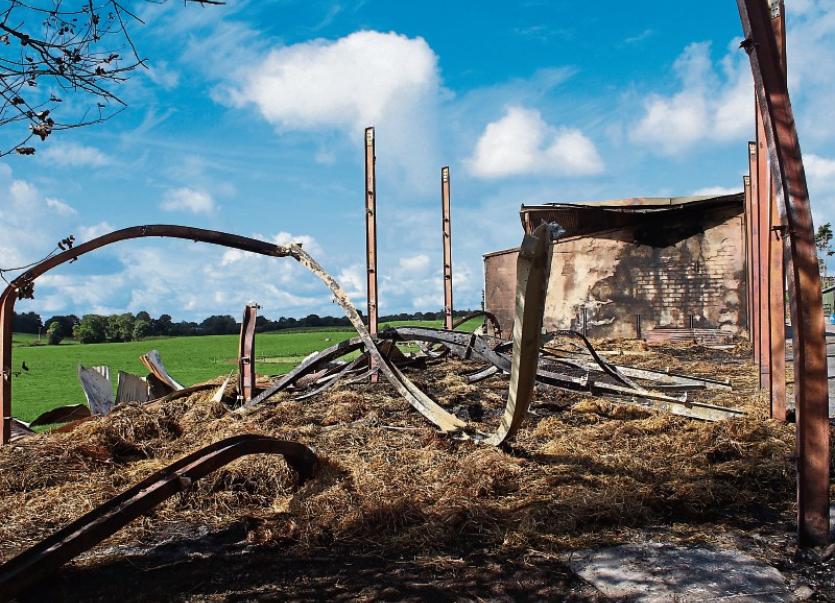 The aftermath of the fire at Copeswood Dairy Farm, Pallaskenry

A YOUNG man has admitted setting fire to a large hay barn in West Limerick almost three years ago.

When arraigned at Limerick Circuit Court on Tuesday morning, Seamus McCarthy, aged 21, who has an address at Knocknasna, Abbeyfeale pleaded guilty to a single charge of arson.

The charge, under the provisions of the Criminal Damage Act, relates to an incident at Copeswood Dairy Farm, Shannon Grove, Pallaskenry in the early hours of September 24, 2014.

The hay barn, which was located in the dairy yard at Pallaskenry Agricultural College, was completely destroyed in the blaze.

No other buildings or machinery were damaged.

A large number of bales of straw and hay were also destroyed in the fire but no livestock, people were injured.

After the alarm was raised by a local resident, four units of the fire service remained at the scene for almost six hours in a bid to ensure the fire was totally extinguished and there was no risk of it re-igniting.

A garda investigation was subsequently launched resulting in Mr McCarthy being arrested and charged and brought before the district court.

The matter, which is being dealt with on indictment, was forwarded to the circuit court in recent weeks.

After the defendant entered his guilty plea, Erin O’Hagan BL, defending, asked that a court-sanctioned probation report be prepared in relation to her client ahead of the sentencing process.

Judge Tom O’Donnell agreed and after requesting that a report be prepared he adjourned the matter for review on July 28, next.

Mr McCarthy was remanded on continuing bail pending his next court appearance.

While the maximum sentence for arson is life imprisonment, such a penalty is unlikely the case of Mr McCarthy.