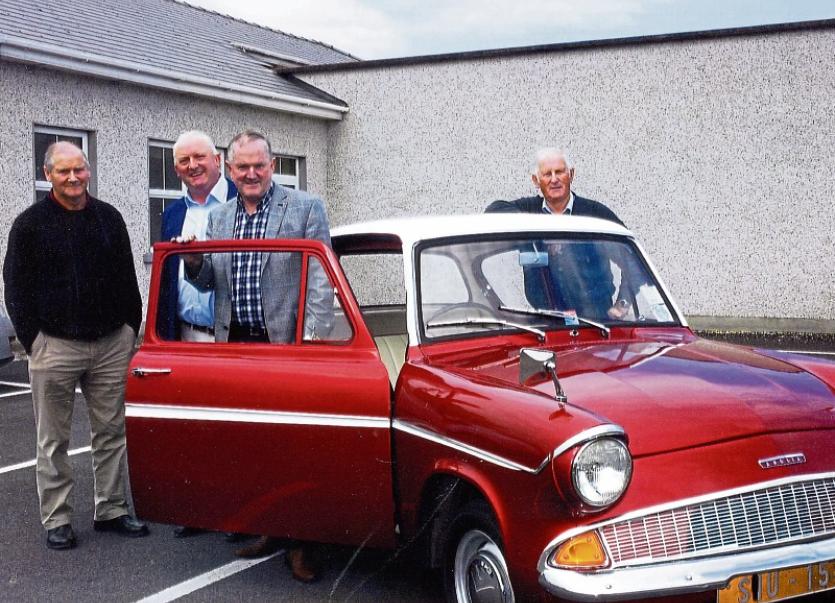 NOT many people can sit into their first car after 50 years, but west Limerick businessman Tadhg O’Connor is one of those after being reunited with his first ever car: a 1967 Ford Anglia.

He bought the car, his very first, brand new from Nash’s in Newcastle West for the princely sum of £555.

“You wouldn’t be buying much now for that. I was straight out of college and I was beginning to teach in Rathkeale,” he said.

“I hadn’t seen it since - I traded it in after a couple of years to Adam’s of Glin, and I bought a Mirafiori, which was a new Fiat that was out at the time. That was the car to have,” he recalled.

And on cars, “I’ve bought a lot of them since!” said Tadhg.

The reunion was made possible by a number of car enthusiasts from the local area. Conor McCarthy, Adare, noticed the impeccable car at a vintage run last October, and began talking to its owner Patrick Dunne, from Newmarket-on-Fergus.

“The car looked exceptionally good for its age and condition. I enquired with Billy Conroy of the West Limerick Vintage Club, and he knew the history behind the car, that it had belonged to Tadhg O’Connor,” added Mr McCarthy.

“There aren’t many people who could go back into the car they bought 50 years ago,” he said.

Conor made contact with the O’Connors, and it was organised that they would meet at the Josie Conroy Memorial Run this May. Ford Ireland presented Tadhg with a jacket to commemorate the 100th anniversary of Ford in Ireland.

The car had a new look since Tadhg originally drove it however, as it underwent extensive refurbishment nine years ago.

Patrick along with his brother Tom Dunne are skilled at bringing cars back to life, and they painstakingly and lovingly restored the vehicle.

“It’s secured for the next 50 years. It’s a testament to how good those cars were,” said Mr McCarthy.