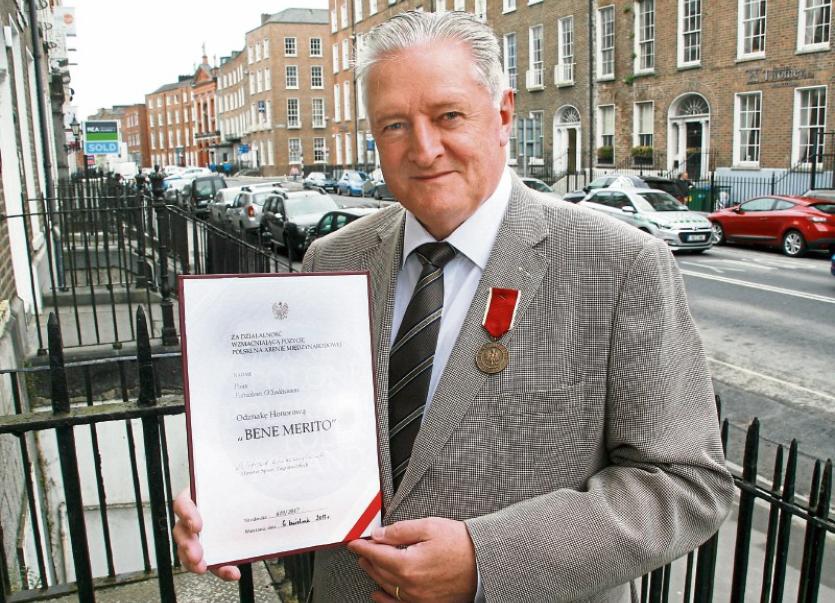 LIMERICK man Patrick O’Sullivan has become one of only a select group of people to receive an honorary distinction from the Polish government.

Mr O’Sullivan, the honorary consul of Poland in Limerick, received the ‘Bene Merito’ honorary distinction at a special ceremony in City Hall.

The designation is awarded by Poland’s Minister of Foreign Affairs in recognition of his work with Limerick’s Polish community.

Asked how he felt when he received the award from Polish ambassador Ryszard Sarkowicz, he said: “I was totally surprised – pleasantly so. These things are not given out easily. But I was thrilled. You don’t do this work to get an award. But when one comes, it feels like a lovely thank you.”

Mr O’Sullivan is the only person in Ireland who has secured the award – and Ambassador Sarkowicz said it is the first time he has given one out.

The Lough Gur man has worked with the city’s Polish community for more than 25 years, establishing the Polish Cultural Association, the Limerick-Polish Business Association, and the Polish-Irish Chamber. The Polish consulate at 66 O’Connell Street was established in 2011, and exists to promote trade between Limerick, Clare and Poland.

“I believe we’ve been very successful in terms of winning companies and making products available right throughout the country,” Mr O’Sullivan added.

The award ceremony was combined with the historical exhibition ‘Friends in Times of Turmoil’ which is about the life and career of Consul-General Dobrzynski.