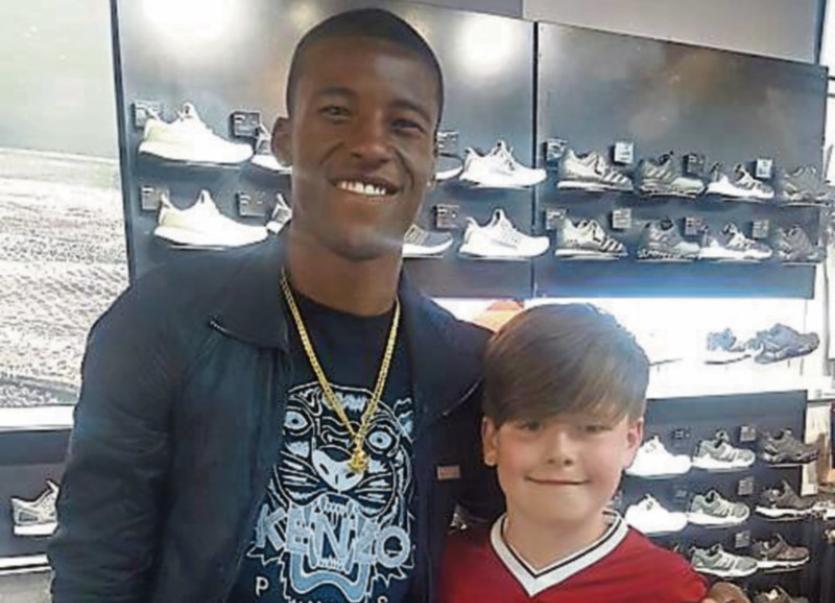 Paddy Ryan, with Liverpool star Georgino Wijnaldum who scored in his side's 3-0 win over Middlesbrough on Sunday

But then he met the Reds’ Dutch midfielder Georgino Wijnaldum, who shocked the 11-year-old city lad with a random act of kindness in an Adidas store at Liverpool city centre.

Having travelled over to Merseyside with his mum Louise for Liverpool’s 3-0 win over Middlesbrough on Sunday, Wijnaldum spotted young Liam enviously eyeing the €347 Adidas PureControl football boots.

The Dutch international – who scored the crucial first goal as Liverpool secured a money-spinning top four Premier League finish – saw Paddy and leaned in behind him asking ‘Do you like those boots’, and what size he is.

His Mum asked Paddy to hurry up as they left the store, and with that, the shop assistant ran down the street after Paddy and asked him to come back as the soccer star had bought Paddy the boots before agreeing to taking another picture with him after their first picture together came out poorly.

"We went into the Adidas store and Paddy just went and bought a pair of skinny pants, and of course being a typical Irish mammy, I went 'come on so' because he would stay looking at soccer stuff all day if you let him," Louise told Ray D'Arcy on RTE Radio 1 on Monday.

"I was like 'come on, come on' and so we came out of the shop and he said 'I got a selfie with him' and I was like 'oh brilliant' and he said they started chatting about the soccer boots.

"He said to Paddy 'do you like those boots?' And Paddy said 'I do'.

"He said 'what size are you?' and he said 'size five' and he was like 'why don't you buy them?' And Paddy was like 'they're so expensive'.

"At that stage I had called him and we left the store and Paddy was telling me this and we walked out into the city and we literally just looked behind and the lady from the store had ran after us and she said 'listen, can you come back to the store? He wants to buy Paddy the boots'."

His mother Louise said that he was delighted with Wijnaldum's act of kindness and now wished he had printed the 26-year-old's name on the back of his jersey - rather than Emre Can.