Hear ye, hear ye: Concept has been floating about for many years 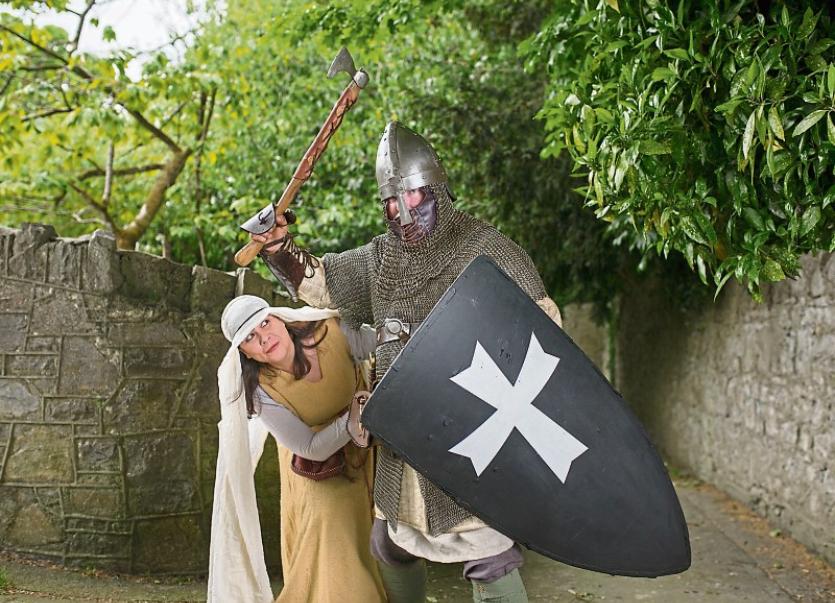 NEWCASTLE West is the ideal location for a Medieval Festival according to a group of enthusiasts in the town who are hoping to get one up and running in May or early June next year.

And they are now calling on people in the area to come on board and help make it a reality.

The concept has been floating about for many years, according to Con O’Sullivan,who is chairman of the newly established Desmond Medieval Festival committee. Both he and re-enactor, Sean Shiels, have been travelling to various medieval festivals all over Europe, he explained.

“We decided it would be nice to have one in our home town,” Mr O’Sullivan added. “We are steeped in history here and we want to make it as culturally open as possible, a family friendly event as well as an educational one. We also want to try to bring more tourists into town and make people aware of our historical heritage.”

The idea, Mr O’Sullivan explained, would be to run a weekend festival, where there would be people in period costume and their hope would be to base it in the Desmond Castle. They have already written to the OPW on that score.

“We would like to have stalls with arts and crafts of the period, and have people giving talks about the different aspects of life and local history.”

“We would also hope to get some re-enactment scenes,” Mr O’Sullivan added, stressing that “this is not about the glorification of combat.” “It is about history and education,” he said.

The new committee’s secretary, Mark Darcy, is equally enthusiastic. A native of Wexford now married and living with a family in Newcastle West, he felt a Medieval Festival would be a boost to tourism in the town. “The castle is probably one of the most under-used places in the town,” he said.

“I would have grown up in a Norman town and there was a lot of history around,” he said, explaining his reasons for getting involved.

“When the opportunity  came up to get involved in something here, to be involved in the setting up of something, I said yes.”

It was, he added, as much to educate the children as anything else.

A native of Estonia who has made her home here over the past 13 years, she is hoping to get people interested in setting up a medieval dancing group.

Anyone interested in the Desmond Medieval Festival idea can go along to a meeting in the Red Door Gallery next Thursday, May 25 at 7.30pm or contact conosullivan@mail.com.