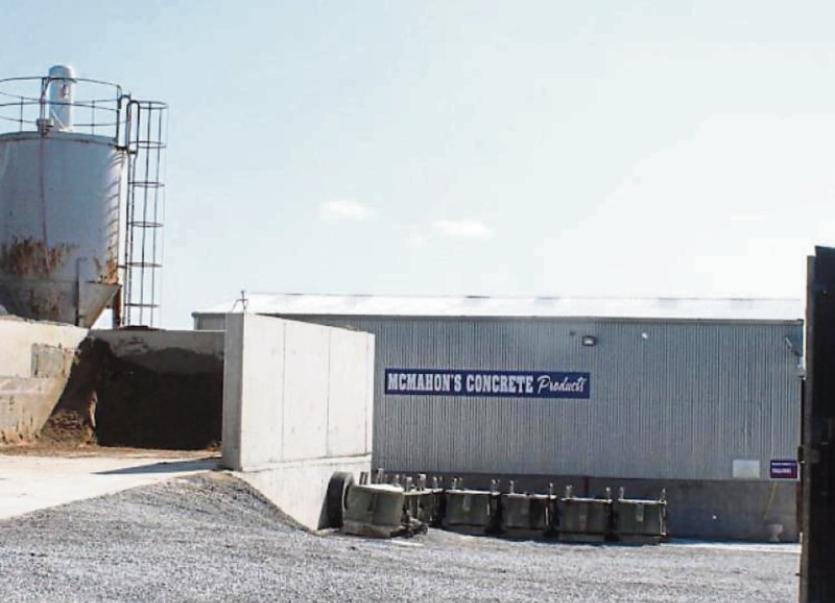 THE Ardagh-based concrete products company which pleaded guilty, in September 2015, to breaches of the air and water pollution acts and to causing excessive noise at its site, has been ordered to pay costs of over €7,340 to Limerick City and County Council.

McMahons Concrete Products has until July 4 to pay the legal and other costs incurred by the council in bringing the prosecution against the company, Judge Mary Larkin ruled at Newcastle West court.

She also indicated she could impose a fine of €1,000 on each of the three breaches at that time.

But solicitor for the company, John Lynch, said the company was anxious to avoid a conviction. It was, he pleaded, a family run company with 12 employees in a rural part of West Limerick.

“Matters were brought to the attention of the council by neighbours,” he said, “and the company has cooperated with the council at all times.”

The company, he added, had spent over €60,000 modernising its operation.

Paul O’Grady, a executive engineer with Limerick City and County Council, told the court that when the matter first came before the court in September 2015, evidence was given about dust and noise from the site and about waste water run-off.

Neighbours living close to the site were the main source of complaints, he said.

At that time, undertakings were given by the company to operate between given hours only, to bring the waste water off-site and to install gauges to ensure dust levels stayed within given limits. It was also agreed to sprinkle the site to control dust levels.

Mr O’Grady said he had made seven visits to the site, all but one of them unannounced, and had not witnessed any breaches of the undertakings.

“If the behaviour can be sustained, and if monitoring can be kept, I would be happy, yes,” he told prosecuting solicitor, Will Leahy.

He added that there might be need for “some small tweaks”.

Limerick City and County Council had incurred legal and other costs of €7,342.38, Mr Leahy said and the case had involved 92 hours of work by inspectors. He asked Judge Larkin to “indicate a fine”.

“If costs are discharged by that date, I am in your hands in relation to it,” he said.

However, he continued, on that date, the council would be prosecuting the company for unauthorised development.

“The evidence of the council will be that none of the site has planning permission. The whole site is unauthorised,” Mr Leahy said.

It would be the company’s claim that certain buildings were built before March 2008 and therefore were outside the seven-year rule, he explained.

When McMahon Concrete Products first appeared before Judge Mary Larkin in September 2015, the company agreed to relocate. The court was told that the company had grown and that the existing site was no longer suitable.

In March 2016, Judge Larkin gave the company until April 5 to come up with a definite plan and timeframe for moving the business. At that court, a company employee, Paul O’Looney said: “I can confirm we are serious about moving and making every effort to move.”

A site in Co Clare had been identified and negotiations for the site had begun, the court heard.

The next step, he explained, would be raising the finance to complete the purchase. He felt it would take about three months to complete. But, he said, in light of the planning issues on site, “that would affect our ability to raise finance.”

The company had met with officials from the planning section of Limerick City and County Council in a bid to find a solution for the existing site as opposed to relocation, he said but were told “they could do nothing with the existing site.

The company needed to be able to sell the site to cover €400,000 of debt and to buy a new site, he explained, but had been told the site was useless.

By July, the council had accepted the company was not going to relocate.

“This is a complicated matter,” Will Leahy said. “It is a dispute between neighbours and a manufacturing plant.”

“We could fight it out,” he added, but he felt that the outcome would be a recourse to some form of mediation.

The council accepted that the company had satisfied its undertakings relating to the original breaches and the matter will be finalised on July 4. The planning issue remains outstanding.