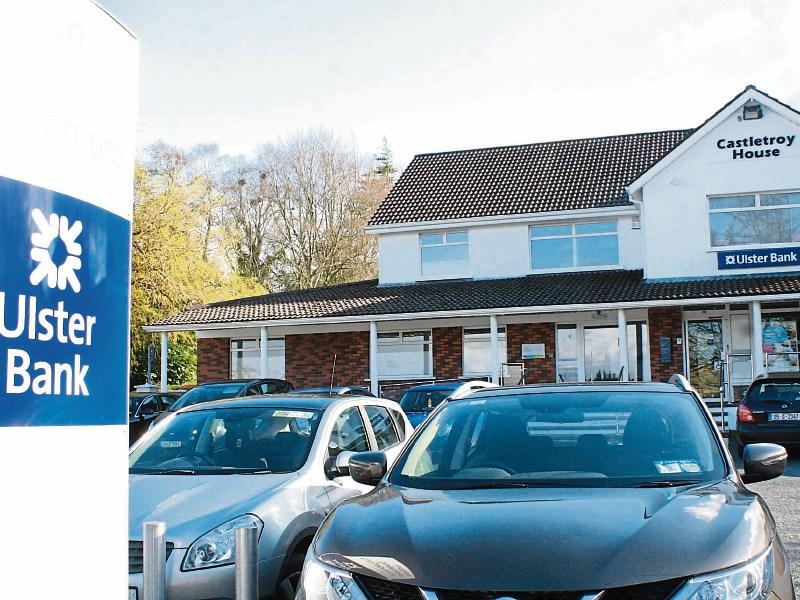 UP to 15 jobs will be lost when the Ulster Bank branches in Newcastle West and Castletroy close on September 15, the union representing bank workers, the Financial Services Union (FSU), has said.

The union is opposing the Limerick closures and the 20 other branch closures nationwide announced last week Ulster Bank as part of a restructuring of their  network and a downsizing of staff of 220.

However, a spokeswoman for Ulster Bank insisted  that any redundancies would be “volunteer led” and across the company, not just in the retail end. Putting the Limerick closures in context, she said, an average of 150 customers had used those branches in the past week or just 30 per day.

“We know this won’t suit some customers, and for those, we have a number of supports in place including the newly created roles of Community Bankers.”

But the FSU  has countered that Ulster Bank made a profit of €280m in its Irish operation in 2016 and said that “the scale and severity of the cuts announced are completely disproportionate and unjustified”.

The 22 bank closures bring to 46 the number of closures announced by financial institutions since the start of the year, FSU general secretary Larry Broderick said.

And he warned about the the consequences for financial services generally.

“In the Republic there is also very grave speculation regarding the future of the post office network.  What is clear is that we cannot allow this hollowing out of access to banking and other services continue on an ad hoc basis,” he said.

The closure of the bank was met with dismay in Newcastle West.

“Gutted,” was the reaction of Vickie O’Sullivan, the chairperson of Newcastle West Business Association when  the announcement became public.

“It has come as a shock,” she said, expressing sympathy for the staff.  But she added, it had become less attractive for businesses to conduct their affairs with the bank.

“You could do lodgements and withdrawals but if you wanted to discuss issues or there was any change to your business status you had to ring a number elsewhere,” she said.

“It is a huge pity for the town just when people were beginning to think that things were picking up for Newcastle West,” Ms O’Sullivan added.

The closure of the branch in September would have a huge knock-on effect on the Market Yard, she added, particularly as Garvey’s SuperValu had closed and the post office had relocated.

Public reaction was muted in Castletroy according to Cllr Joe Pond, FF, but he believes it is “crazy” to be closing banks. “I don’t think it should be closed. Castletroy is a huge area to be served,” he said, pointing out that a lot of people locally use their bank to pay bills.

“It is unfortunate that the branch is closing, first of all because of the loss of jobs,” Labour’s Cllr Elena Secas said. “We are trying to get more businesses into this area and when you see a business closing down it is very unfortunate.”

“While this is clearly a corporate decision which has been made by a private company, I would strongly urge Ulster Bank to make every effort to keep the branches open for the good of the local community,” he said.

“Only three months ago  Sinn Féin questioned Ulster Bank over what plans if any they had to close further branches, and they gave no indication then that further closures were imminent.”