Footage of fight was posted on social media 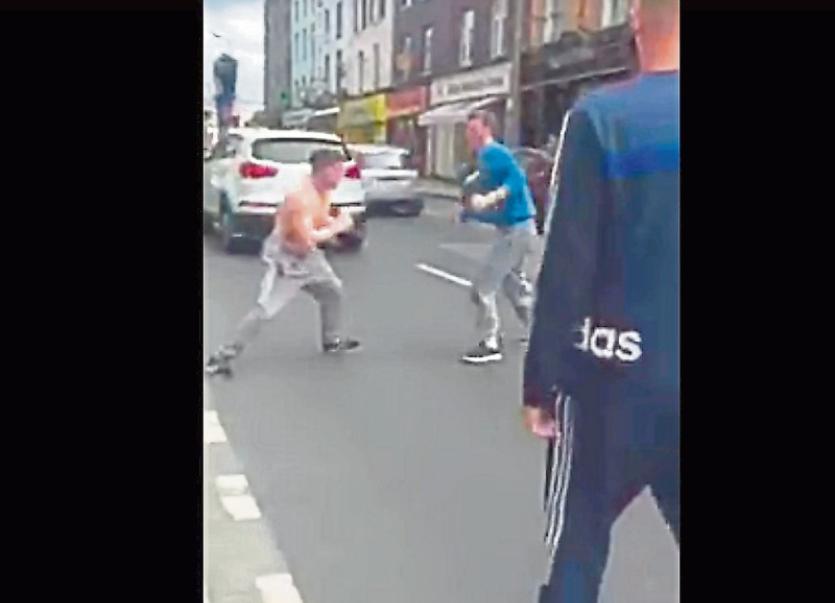 A still from the video which was posted on Facebook

TWO young men who were recorded while fighting in the middle of William Street last year have pleaded guilty to affray charges.

Ray Dore, aged 21, of Dromroe, Rhebogue and Hayden McCallig, aged 21, of Sunnyside Court, John Carew Park were identified by gardai and prosecuted after footage of the fight was uploaded to social media.

The footage, which was recorded on a mobile phone, was uploaded to Facebook where it was viewed thousands of times before being removed.

Throughout the video, another man can be heard shouting instructions to the men as the fight moves between the footpath and the road.

He can be heard encouraging them to throw punches “uppercuts” and “jabs” at each other.

Sergeant Donal Cronin told Limerick District Court the prosecution was “highly unusual” given that footage of the fight had found its way onto social media.

He said there were members of the public present in the area at the time and that a number of people appeared to have been discommoded during fight which happened at around 3.50pm on May 23, 2016.

He said the footage was uploaded to Facebook by another individual and that neither defendant has any previous convictions.

Solicitor John Herbert said the two men were passing each other on the street when “something was said which resulted in fist fight”.

He said there was no explanation for what happened and that neither man has come to the attention of gardai since.

“It’s not something that’s going to happen again,” he said.

Judge Marian O’Leary indicated she will strike out the matter if each of the defendants pays €200 to the court poor box by June 16, next.