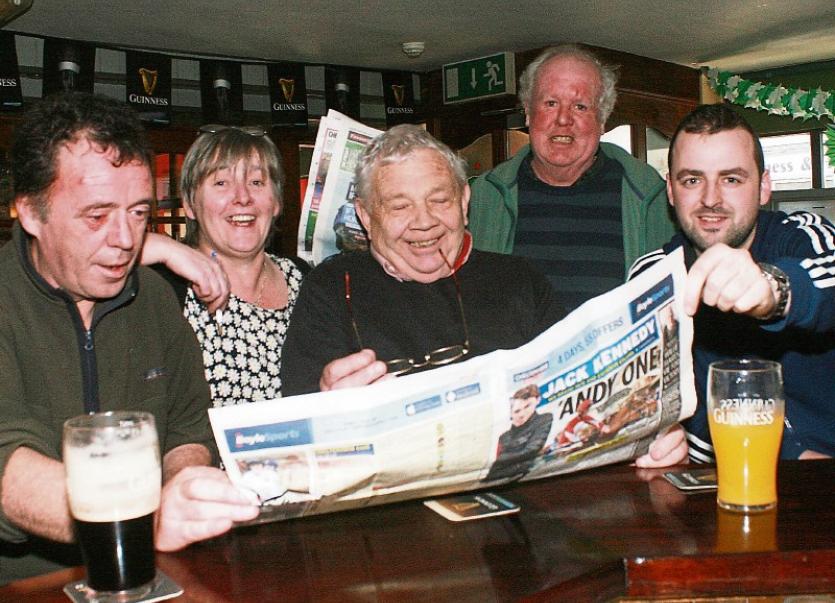 That is the ill-fated sound of a Cheltenham fanatic who believes he has banked a few pints’ worth, but instead loses it all in a millisecond at the finish line.

Charlie Malone’s, on Wolfe Tone Street, is brimming with the whole gamut of punters. Students pooling in their pennies for the pound; chancers selecting horse names at random; bystanders who just want to enjoy their afternoon stout; and the stolid, experienced seniors who barely move a muscle, even when they lose.

The first day proved to be memorable for Limerick, with the National Hunt Chase ran in honour of late Croom jockey, John Thomas McNamara, who died, aged 41, just last July.

His three children Dylan, Harry and Olivia joined his wife, Caroline at the podium to present jockey Lisa O’Neil with the prize for the four-mile race.

Earlier this year, Caroline said that it was a “huge honour” in his memory.

"We are humbled and overwhelmed by the continued support we receive from everyone. John Thomas was never one for the limelight during his career, but I am sure that he would want his life remembered for his achievements and success, especially those 16 wins at Cheltenham,” she said.

JP McManus who was “quite hopeful” before the races, told ITV that for anyone who anything to do with racing “it revolves around Cheltenham”.

And though scenes of jovial winners were few on Wolfe Tone Street in the afternoon, spirits remained high during the first day of the prestigious festival.

Loss and the thrill of winning are part and parcel of the exhilarating Cheltenham atmosphere, says betting stalwart John Beegan, who quietly observes his chances of winning a few quid with JP McManus’ Yanworth for the key Champion Hurdle. Alas he picked the wrong JP horse.

“Come Friday, you won’t be able to get inside this place,” he warns, commenting on the popularity of the races.

Primary teaching student Joe says he’s using his mathematical strengths to win a few bob — €10 on Yanworth and €2 each way on The New One. “I judge them on their history and how they have performed. But I never bet that much. €20 is my max, as it’s all about the craic,” he explains.

Another Mary Immaculate College student, Seamus says he got a reliable tip from some expert sources, and so chose Yanworth to bring the goods.

“I am a first year, so something has to pay for the pints, right?” he laughs.

Kildimo man, Bill O’Reilly put down a fiver each way for Measure of My Dreams, who finished in 13th position in the Ultima Handicap Chase. His reason for choosing the horse? “It’s in the line of a song I like. But what I know about horse racing, I could write on the back of a stamp! I just love the buzz.”

Former Clare councillor John McInerney also has his heart set on the horse that’s on the tip of everyone’s tongue. After a quick survey of the pub, it seems everyone thinks Yanworth is a sure thing. “There’s no such thing as a sure thing in Cheltenham. You see the best of them come down and, hopefully, we will get there. But there’s great atmosphere. If you just look around, there is a fierce crowd here. It’s a great pub for the racing.”

The race starts with a collective grumbling of “Gowan! Come on!” and then quietens. The murmuring amongst the 50-something punters vanishes in a vacuum, as eyes fixate on the big screens. A few lean over their newspaper markings, comparing their notes to what’s happening on the TV. A pint sits on the lower lip of one man who attentively watches his horse finish the first furlong. Smaller-sized folk stand on their toes for viewing privileges, while some don’t watch at all.

“I know nothing about horses,” says Paul, digging into his lunch. “I just came in here to see a friend, and now I am surrounded by everyone here. But there’s a great atmosphere.”

Even into the second mile of the hurdle, the decibels in the room have only increased by a smidgen, as Yanworth trails behind a number of horses, including JP’s other hopefuls, My Tent Or Yours and the eventual victor, Buveur D’Air.

As Noel Fehily comfortably crosses the finish line, the room fills with utterings of disappointment, with one shriek of joy heard near the front of the bar.

South Circular Road local, Triona Hayes was one of very few to bet on JP McManus’ winning horse, and was the only female punter to be seen in the pub. Even with a small bet of €3, Triona is still delighted.

“I feel great,” she says, elated, not knowing yet what her winnings are. “I could have put down 10 cents on that horse and I have been delighted!” Her friend Austin Murphy says he loves betting on the horses at Cheltenham.

Reflecting on the win with Buveur D’Air, JP McManus said shortly after the race: “It looked like he had his chance. He was reading the script at that stage, and I kind of had my eye on My Tent [Or Yours] because he was in behind him and it seemed to be, for him, to be going according to plan, too.”

Reeling through the years, JP commented on his 1982 Cheltenham win: “I often said, if Mister Donovan hadn’t won, I am not sure if I’d have had the others,” he laughed. And each race is “magical”, he adds.

Before the win, JP told ITV of his love for the races: “The worst thing about this week is Saturday morning, you get the withdrawal symptoms and wondering what are you going to do for a while. But let’s enjoy it while we are here.”