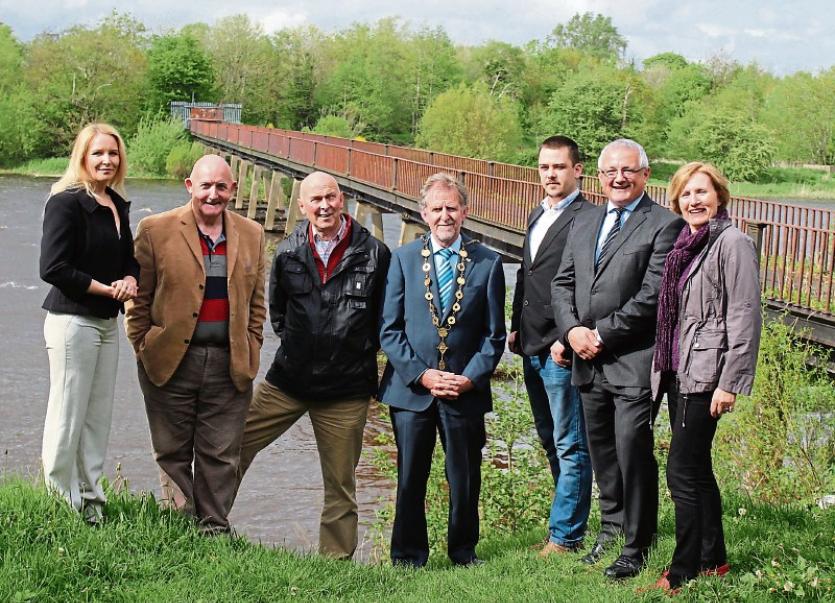 The city east Limerick councillors at the Black Bridge in Plassey

A TOTAL of €1m is needed to re-open the Black Bridge in Plassey, councillors have been told.

The damage done to the walkway by floods in late 2009, and its closure since then have ensured the bridge has fallen into a huge level of disrepair.

And a study from Limerick City and County Council has shown that a seven figure sum is required to ensure the landmark bridge back open again.

Fine Gael councillor Marian Hurley is now calling on local companies and agencies to help with the fundraising effort to ensure the Black Bridge returns to its former glories.

Although City East members have agreed to donate €50,000 of a special fund for their area to start work to make the walkway safe again, Cllr Hurley says private sector intervention is key.

“I will be asking bodies like UL and Waterways Ireland, and other groups we have spoken to in the past, including Clare County Council and our own local authority to all come together,” she said.

The former Shannon Development executive feels Failte Ireland and Smarter Travel should also row in behind the initiative.

“It’s so much a part of the fabric of the area. A lot of people live in the Rhebogue and Plassey areas on the outskirts of the city, and they are so fond of it. It’s favourite haunt of anglers, and it would be lovely to see them back on the bridge and carrying on the practice they are used to,” she said.

The first-term councillor has been contacted by dozens of people since she was elected, and has a result, set up a database on people to contact.

Opened around 1840, the Black Bridge, which is a protected structure, has always been a popular spot with fisherman and other locals.

But the floods of 2009 saw the bridge almost submerged.

It was as a result of this that the local authority – at the time Limerick County Council – closed the bridge to access.

They were removed for a time the year after before the council promptly put them back up when it became clear it was unsafe to cross the river on the Black Bridge.

For more information, and to get involved in the Black Bridge campaign, contact Cllr Hurley at 086 2449297.