Limerick developer criticises banks for refusal to back housing 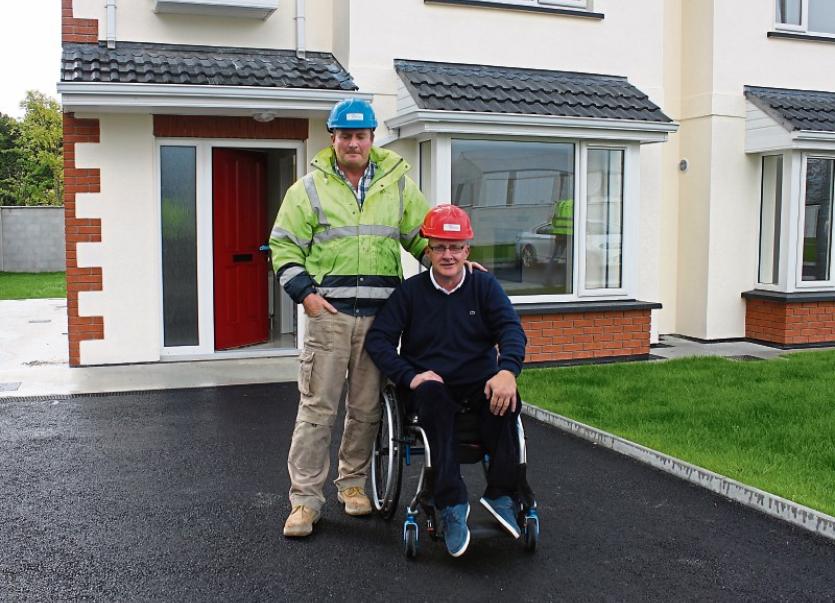 Denis Corbett, standing, and Tony Brouder at one of Denton Construction Ltd houses

A NEWCASTLE West developer has castigated bank lending policies and practices which he claims are frustrating his company’s ability to deliver the much-needed new houses in the town.

And he is so frustrated with the banking system and with his own bank in particular that he has written to Housing Minister Simon Coveney to try to “open his eyes” to what is happening.

Tony Brouder is managing director of Denton Construction Ltd which he set up following a medical misadventure in 2011 which left him wheelchair-bound. He manages the office end of things, he told the Limerick Leader while his friend and builder Denis Corbett manages the site.

But in order to complete the building of 29 houses in three phases at Arra View, Newcastle West, the company has had to seek private investors and pay 20% interest rates as opposed to 7%.

The first phase of eight houses has sold out, Mr Brouder explained, but the €450,000 bank loan they were told they could rely on for phase two has since been withdrawn.

The bank, Mr Brouder said, told them they were “not interested and to come back for phase three.”

“They laid out the hurdles and we jumped them. Then they raised the hurdles,” Mr Corbett said. “We are dealing with a bank that got money from the government to help the likes of us but they (the banks) give us no help.”

The company has also approached other banks but they too have indicated “they are not interested in construction companies”.

“They won’t look at Limerick,” Mr Brouder said this week, just days after he sent his letter to Minister Coveney.

“If you were in Cork, Galway or Dublin, they would give you the money.”

Mr Brouder and Mr Corbett are also critical of a bank practice which they claim means that banks are being deliberately slow in releasing mortgages. This has left buyers waiting for months before they get their key and has also had a knock-on effect on the company’s cash flow.

“That is a massive issue,” Mr Corbett said.

If the company were to get the prompt financial backing they need and feel they deserve, the 29 house estate could be finished by the end of the year, both men agree. They could then proceed to develop a further 69 houses at Woodfield.

It is  crystal clear, they point out, that there is huge demand for houses in Newcastle West,  both to buy and rent.

But Mr Brouder asks: “How are we ever going to get out of this rut that the country is in, when construction companies like us,  who are trying our best to develop and provide houses to deal with the housing crisis and homelessness that’s there, are receiving no support from our financial institutions?”.

Mr Brouder, who received compensation for his injuries, is also baffled that he has been turned down for mortgages he has sought for three investment properties, despite the fact that he has proposed sizeable cash deposits, has no significant outgoings on his salary and has means.