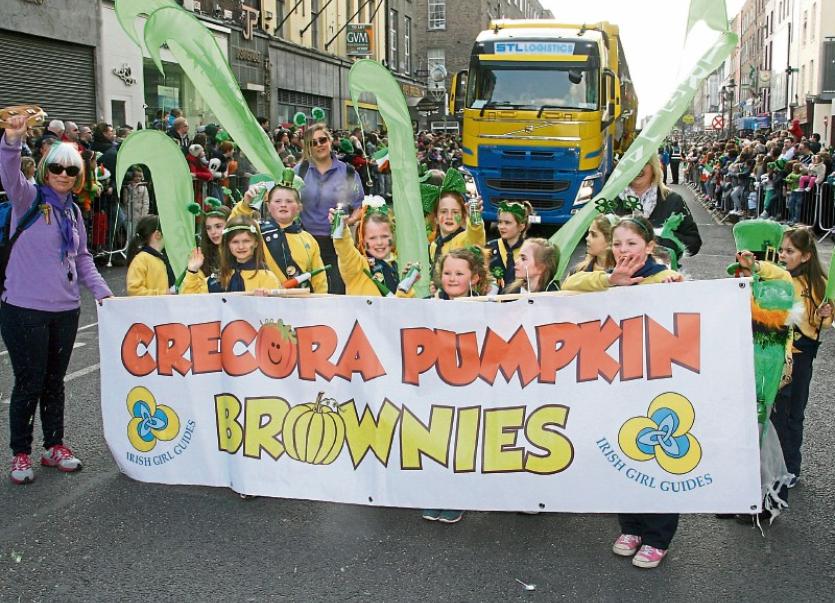 We can march again: Crecora Brownies can take part in this year's St Patrick's Day parade in the city

A PUBLIC outcry from parents and community groups has forced the organisers of a St Patrick’s Day parade into an embarrassing u-turn.

When application forms to participate in the city’s March 17 festivities went out in recent days, it stipulated: “The minimum age for walking entries is eight. All children under eight are required to be on a float or in suitable transportation. Walking participants under the age limit will not be accepted.”

Paul Walsh, Scout leader in Clarina, summed up the feelings of many when he labelled the move a “disgrace”.

“Putting kids on a moving object, combined with the excitement levels – it would be 10 times harder to control them in that kind of environment than letting them walk, and more dangerous,” said Mr Walsh.

The Leader received a number of emails and phone calls from upset parents and volunteers. It is understood Limerick City and County Council also received a barrage of correspondence.

However, this Wednesday afternoon there was a climb down.

A statement issued to the Limerick Leader by the council said: “Following a review of the concerns expressed regarding the participants of under 8’s in the St Patrick's Day parade, the following changes have been made.

“Due to the nature, length and duration of the parade we advise that all children under the age of six-years-old participate in the parade by float or vehicle etc and not on f​​oot.

​”However, it is at the discretion of the parents and groups to make this decision. The age criteria had been introduced, following advice and feedback, in the interests of the welfare of younger children, who have to march the almost two kilometre-long parade route.

“Feedback from previous years was that young children tended to become very tired as the route wore on and it was unfair to have children walking so far.” The parade is being organised by Grooveyard Event Management.

The change of tack may be too late for one group. Ursula Cosgrove, a group leader with Ballybricken Scouts, said she couldn’t believe the original decision.

“We have 24 Beavers aged six to nine. How could I tell some of them they couldn’t march in the parade with their friends or brothers and sisters. No way was I letting half my group walk down O’Connell Street. It was crazy,” said Ms Cosgrove.

While welcoming the news she said organisers of Herbertstown parade contacted them “in their hour of need” on Tuesday evening to invite them.

“They were happy to include our whole group,” she said. And the consensus amongst the leaders is that Ballybricken Scouts will now take Herbertstown up on their generous offer.

Evelyn Pepperrell, former leader with the Crecora Brownies who are pictured on page 1, said if she had to tell her daughter, when she was under 8, that she couldn’t march due to her age she would have been “gutted”.

“It is brilliant for their confidence to walk down O’Connell Street in front of the crowds. There is only a small window of opportunity where kids are brave enough to do this. When they get older it isn’t cool any longer to be marching,” said Ms Pepperrell.

Mike O’Riordan, secretary of Limerick County Board, said: “Parades and events like that lend themselves to excitement for kids. It would be a disappointment if clubs couldn’t show off their youngsters in that fashion and wear their team colours with pride.”

“There are two aspects – we all know it can be a cold wet day. I suppose the organisers want it to run as efficiently as possible and it can be tiresome if there are big gaps in the parade.

“However, having said that I was very much involved with the Catholic Boy Scouts in my day and I know marching in your uniform as a scout or girl guide – you would be as proud as a peacock. It is a big occasion for the children and their parents. It was the highlight of St Patrick’s Day. The parade has to be inclusive and it is very important we allow everybody to march,” said Mayor O’Hanlon.