INSPIRATION:  CYCLIST GIVES MESSAGE OF HOPE TO KIDS IN UHL 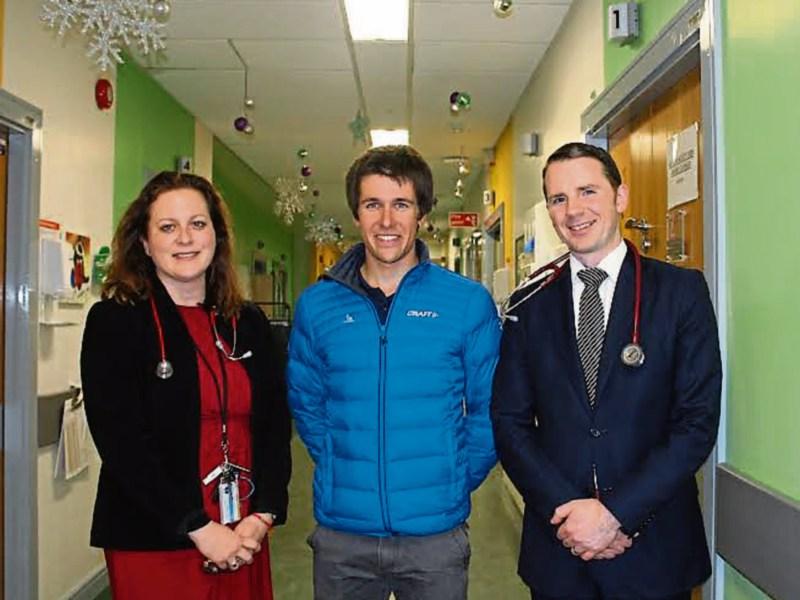 A DIAGNOSIS of type 1 diabetes does not have to spell “career death” for elite athletes.

Speaking passionately during a recent visit to the Children’s Ark at University Hospital Limerick, Stephen Clancy, from Dooradoyle, encouraged others not give up on their dreams inspite of any conditions diagnosed.

Stephen is a member of the world’s first all-diabetes cycling team Novo Nordisk, and is also a diabetes ambassador.

Growing up in Dooradoyle, he was a sports-mad youngster and decided to focus fully on cycling at 16. However, after signing with Ireland’s top domestic squad, Dan Morrissey-Speedyspokes, he was diagnosed with type 1 diabetes – which, he feared, would end his sporting ambitions.

“My consultant told me that it was one of the most difficult conditions to manage and that I should limit myself to one mile per day, where I had been doing 200 miles per day the previous week. In short, for me it was career death. The only question on my mind was what it would mean for my cycling career. I started researching online and that was how I found out about Team Novo Nordisk,” said Stephen.

Team Novo Nordisk is a global all-diabetes sports team of cyclists, triathletes and runners with almost 100 athletes from over 20 countries. After Stephen made contact, he was invited to train with the team’s development squad in Atlanta, Georgia.

“Six months later I had signed a professional contract. I rang home and quit college and my job in the bike shop back in Limerick,” he said.

With Team Novo Nordisk, he is hoping to qualify to take part in the centennial edition of the Tour de France in 2021 and to quality for the Giro D’Italia before that.

He said that it’s great that others “are able to see a 250km, six hour race is not something that’s beyond them and that I can spread that positive message.”

“Stephen shows that while diabetes is a lifelong condition that needs intensive management, young people with type 1 diabetes can still go on and achieve their goals whether in education, in sport or in life in general.”

At UHL, about 190 children and adolescents attending their service, aged one to 18 years.

“Most diabetes in young children and adolescents is type 1 diabetes mellitus and so these children  require insulin injections as lifelong therapy for their diabetes,” explained Prof O’Gorman. "It is quite different to type 2 diabetes, which is more common in adults."

“Diabetes in children is an unremitting, life-long condition with a very high lifetime rate of complications. Intensive education, intensive management and frequent regular contact with the diabetes team are the mainstays of improving therapy to minimise the risks of complications.

“We expect that modern therapies, and close attention to achieving near normal blood sugars will protect these children and adolescents from the risks of diabetes complications in their future. The young people with type 1 diabetes who attend our clinic display great courage and tenacity, facing insulin injections every day of their lives. It is wonderful to introduce them to someone like Stephen Clancy, who is proof for them that they can achieve their goals, even if they have diabetes,” said Prof O’Gorman.