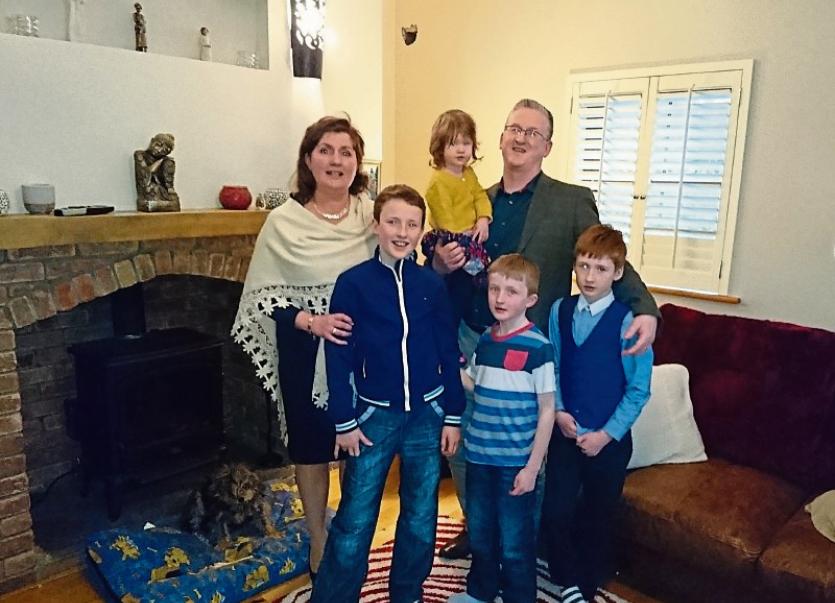 The late Rhona Kett-Sheridan with husband John and their children Euan, Cathal, Fintan and Aisling

THE PARENTS of 15-year-old Sean Holland described the late Rhona Kett-Sheridan as an “angel” and tragically they are now together in heaven.

Sean, from Herbertstown, was one of countless children Rhona touched the lives of through her work with the Jack and Jill Foundation.

Rhona, aged 44, from Murroe passed away on New Year’s Eve - two weeks after Sean who had a rare brain formation disorder.

She and her beloved husband John met in the early 1990s when they were volunteering in orphanages in Romania. They both devoted their lives to the care of others. Rhona did her paediatric training and worked in Temple Street before joining Jack and Jill in 2002.

John, originally from Scotland, is a nurse manager in Milford Hospice where Rhona passed away.

“There is a perception that if you can’t be cured you are dying, but it is very much about life and we were hoping Rhona would have many, many years of life but unfortunately not,” said John.

Movingly, John cared for her at home and in Milford it was John’s friends and colleagues who nursed her. There was a huge attendance from near and far at her funeral Mass and month’s mind in Murroe to pay their respects.

In describing Rhona as an “angel” John and Pearl Holland said “she turned on the light at the end of the tunnel” when Sean was a baby.

“Rhona changed the game, told us what meds we needed and told us to enjoy Sean. And we did,” they said.

It was Rhona’s gift.

John Sheridan wished to thank the local community in Murroe-Boher for their support.

“At one point I wondered would I move back to Scotland, that’s where my family are, but it was about a five second conversation with myself because of the friends and support we have here. It is fantastic,” said John.

Sixteen years ago Fr Tom Ryan married John and Rhona and now, sadly, he was saying her Requiem Mass.

“Their wedding was a great occasion but different in that we had a powerful strong input of Scottish accents. I love that accent. The dress code on the day was different too with a colourful display of kilts.

“John and Rhona met in Romania. They had a wonderful life together. Rhona loved music, her favourite song Caledonia. John’s favourite song, Song for Ireland. They travelled the world together. Rhona was always very impressed with Mother Teresa, was very anxious to meet her and they did meet this wonderful saintly person in Calcutta.

“I’m not surprised that Rhona wanted to meet her because she greatly admired the work she was doing. They had a lot in common especially their love of children and children who were suffering greatly. And so Rhona was very much at home with the Jack and Jill Foundation,” said Fr Ryan, who thanked Jonathan Irwin, nurses and her friends in the charity.

“Thank you all for your loving and caring work that you do for those less well off young people. You have been referred to as Rhona’s second family.

"Rhona was a real giver, a fantastic worker. She touched so many lives - reaching out in love to those in need. And in that way she was really living the Gospel of Jesus, ‘Whatever you did for one of the least of these brothers and sisters of mine, you did for me’.

“She, of course, loved her children and with John prepared them for this day. That to me is something very special. It must have been difficult but it does show how courageous and strong you both were, Rhona and John, and know that the children will be strong.

"Through pain and suffering good things happen. Rhona bore her illness with great strength, courage and faith. Her faith meant an awful lot to her. It kept her strong and carried her over those most difficult days. She was a very spiritual person and a beautiful person,” said Fr Ryan, who added that if you had Rhona in your corner you were very lucky.

He described it as a “minor miracle” that Rhona was able to spend Christmas at home with John and their children.

“She fought the good fight, she kept the faith, she did a power of good in her special vocation in life. People say that life in Ireland has changed an awful lot in that we are all too busy now to be watching out for our neighbours and friends.

"I believe there will always be people in our communities, neighbours and friends who will be there for people going through difficult times - that is true of our community here - so that John and the children will continue to receive love and support over the coming weeks and months from your loyal and faithful friends,” said Fr Tom, who concluded his homily with the words of Scottish poet Robert Burns - “Who shall say that fortune grieves him, While the star of hope she leaves him?

“For John the stars of hope are his four beautiful children - Euan, Cathal, Fintan and Aisling. May Rhona’s friendly, kind and generous soul rest in peace,” said Fr Tom.