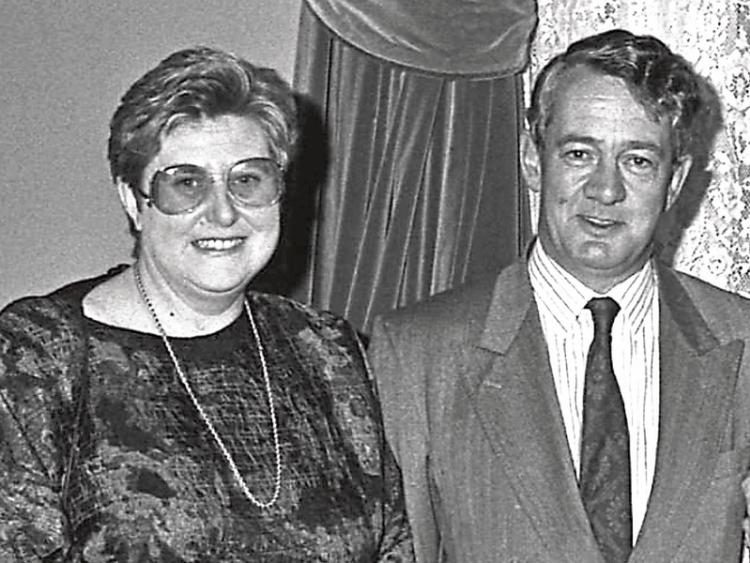 At the Progressive Democrats' dance in Adare Manor, Deputy Des O'Malley with his wife Pat in 1989

Those were among the final words of Patricia (Pat) O’Malley (nee McAleer), a “hidden force in Irish politics” and late wife of Limerick politician Des O’Malley.

Her funeral mass on Saturday in the Sacred Heart Church in Donnybrook, heard moving tributes to the Omagh native, who died in the Blackrock Clinic after battling cancer on Wednesday last, aged 76.

Fr Gerry O’Connor, of the Redemptorists, told the congregation: “At 12.45pm on Wednesday she held my hand and said: ‘I am ready to die, I want to go home’, reported the Sunday Independent today.

Des O’Malley, 78, recognised as one the greatest Limerick politicians, said inspite of a turbulent political career, this was the hardest speech he ever had to give.

“This thing should have been the other way around. I, and most people, expected that I would be the first to go, it would have been better for everyone if that were so, but the better one went first.”

The couple were married in the same church 52 years ago, when he was a “pedestrian provincial solicitor”. They met while she while studying French and history at University College Dublin.

Soon after, he would take up the position as Minister for Justice at the height of the IRA campaign.

He said Pat once returned to their house with their children to find a coffin daubed with threats in the garden.

Due to the demands of his political career, he said she was effectively a “lone parent” for much of that time.

He joked that while she was an “athletic canvasser”, one of her drawbacks in the field was that she didn’t like attending funerals.

Mrs O’Malley famously greeted her husband as he left a Fianna Fáil meeting after having been expelled from the party for “conduct unbecoming”.

The couple kissed for the television cameras, and Des joked: “I hope that is not conduct unbecoming.”

In his memoir of the same name, he wrote: “I could never have done what I did in politics without her wholehearted support. She put up with the absences and the threats.”

She also voiced concerns about the foundation by her husband of the Progressive Democrats, even threatening to publicly disrupt the launch in late 1985.

Their daughter Fiona O’Malley later followed her father into politics, serving as a senator and TD in Dun Laoighaire.

Fianna Fail leader Michael Martin paid tribute to Pat, who he said was “a constant support to Des’s political campaigns since his first election to Dáil Éireann in 1965.”

“A proud Tyrone woman, Pat made Limerick her home, and was embedded in her community in Corbally until she and Des moved to Dublin in 2002.

She is survived by her husband, and children Catherine, Hillary, Maeve, Fiona, Eoin and Des J.