€40m riverside office plan for Limerick in 'jeopardy' after objections 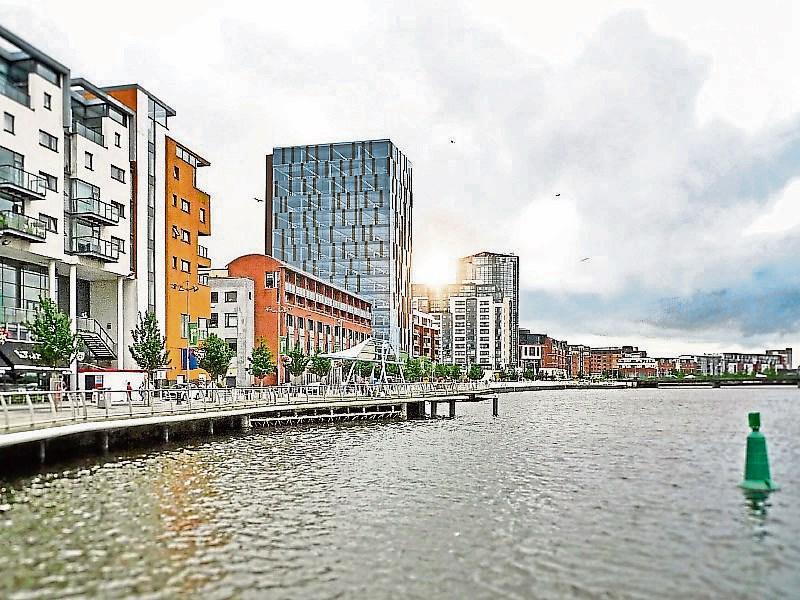 An architect's impression of the proposed new office block

THE developer behind the proposed €40 million office block and apartments at Bishop’s Quay has warned that the “whole project is in jeopardy” after it was confirmed that three different appeals have been made to An Bord Pleanala.

“It is bitterly disappointing. Our prospective tenants for the offices had a deadline with us of the middle of 2018 for handover.

“With the appeal this is not achievable and is going to push us back to the middle of 2019,” said Rudi Butler of Kirkland Investments, which is behind the ambitious project.

“These objections could now put us back a year, and we fear that the tenants we had lined up won’t wait that long and will go elsewhere,” said Mr Butler, who wants to build a 15-storey block looking onto the Shannon at Bishop’s Quay, Lower Cecil Street and also at the old Bord na gCon offices on Henry Street.

“Originally we had observations from seven people, which put the project back. Now three of these have appealed the decision by the council to give us permission to start work,” said the developer.

He said that they had engaged with the objectors and had hoped that they had satisfied their concerns, but was disappointed to learn that the matter is now going to An Bord Pleanala.

Mr Butler said that 800 jobs would have been created, with great interest in the office block and the 42 luxury apartments, as well as the new cafes and restaurants.

“Kirkland Investments understand they have the right to object, and thought we had dealt with their concerns after enga ging with them. The real loser in all this will be Limerick city, if this does not go ahead,” Mr Butler added.

“Making the deadline for the clients we had lined up was tight as it was, but now the project could be put back between six and twelve months. We have just got the news but whether the prospective tenants will wait or go somewhere else remains to be seen,” the developer added.

In order to facilitate the 250,000 square metre development, the former ESB premises at Cecil Street was to be demolished, as well as the rear annex of the former Bord Na gCon offices adjacent to Henry Street garda station, with the adjoining coach house tastefully renovated.

The 42 luxury apartments will have at its head a roof garden, and gym pavilion, plus a landscaped courtyard. Healy and Partners Architects, Glentworth Street, are the architects for the major project.

One hundred construction jobs were envisaged.