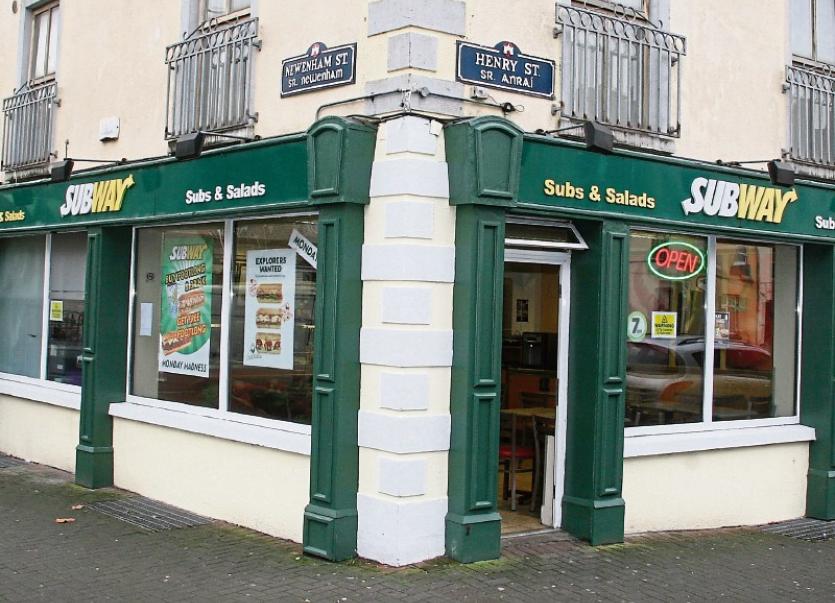 Patrick Kinnane has pleaded not guilty to two charges relating to an incident at Subway, Henry Street last year

A MAN has described how he feared for his life when he was threatened at knifepoint while having a cup of coffee at a cafe in the city centre.

The man was giving evidence during the trial of Patrick Kinnane who denies attempting to rob him during an incident at Subway, Henry Street, on March 8, 2016.

Kinnane, aged 33, who has an address at Galvone Road, Kennedy Park, has also pleaded not guilty to robbing €550 from a member of staff who was working on the night.

In evidence at Limerick Circuit Court, the customer said he ordered a cup of coffee shortly after he arrived at the premises at around 7.10pm.

He told the jury that while sitting at a table, he observed a man wearing a balaclava entering the cafe.

He  said the man, who was wearing a dark-coloured hooded jacket, then produced a breadknife and told him not to move.

Being questioned by John O’Sullivan BL, prosecuting, the witness said the culprit then threatened the female member of staff that he would kill her if she did not hand over money from the till.

He described how the man then “broke the till drawer open”, removed all the notes and demanded money from him before he left the cafe.

“I was afraid for my life, I was totally afraid,” he told the jury.

Being cross-examined by Brian McInerney BL, the man agreed there were a number of discrepancies between his direct evidence and the statement he gave to gardai following the incident.

“You don’t know what weight he was, you couldn’t really tell his height,” commented Mr McInerney who put it to the witness that he had given “two different versions” of what happened.

Earlier the jury was told they will see CCTV footage from a number of nearby premises during the trial.

“There is a strong circumstantial aspect to the case,” said Mr O’Sullivan who told the jury it is the State case that the accused man can be seen putting on a balaclava a short time before the robbery takes place.

The jurors have also been told there will be some legal arguments in their absence.