Angela O'Mara retires after a quarter of a century as secretary 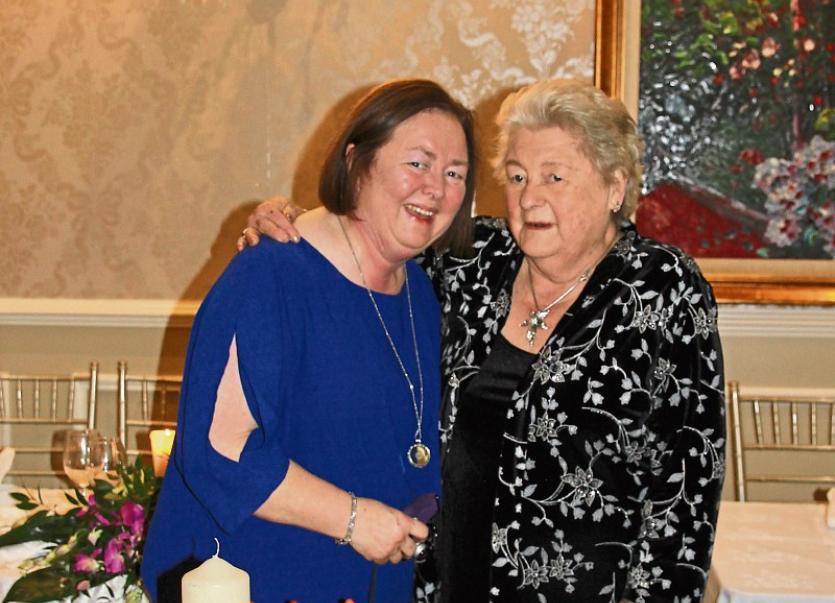 DESPITE being born in Hong Kong – one of the most densely populated urban centres in the world - Angela O’Mara took to the celebration of rural life, that is Limerick Show, like a duck to water.

She has retired after 25 years as show secretary. Her contribution was honoured at a special lunch attended by around 150 in the Woodlands House Hotel on Sunday.

Richard Kennedy, chairman, described Angela, as she is known to one and all, as a “lady to her very fingertips”.

“That is the overriding feeling - if you think of a lady the first person you think of is Angela. She has been the voice, eyes and ears of Limerick Show for 25 years.

“A lot of people had things to say on the day and there were some common threads - she is such a lovely person, so valuable to the show, her approach and dealings with everybody was considerate and she always treated people very well - that came across from everybody,” said Richard.

The good news, he said, is that Angela’s wisdom can still be tapped into.

“We very much value her input - she may not be there on a full-time basis in the future but she is certainly with us in a voluntary capacity and available to us for advice. I have really depended on her. It is an end of an era, there is no question about it from that point of view but she will be on hand for advice for which we are very grateful,” said Richard.

Limerick Show vice-president, Dicky Power shared stories about how Angela came to the county in the first place.

“We all know her here as Angela O’Mara but she hasn't a drop of Irish blood in her veins - she was born in Hong Kong. Not an awful lot of people know that. Hong Kong’s loss was Limerick and Limerick Show’s gain,” said Dicky.

Angela came to Limerick with her mother shortly after she left school to attend a religious function in the Jesuits on the Crescent. During that time she met her husband Mickey – one of the most eligible young men in Limerick as heir to O’Mara’s Bacon Factory. They married and set up home. The rolling fields of County Limerick must have felt like a different planet to the high-rise blocks of Hong Kong.

Dicky and Angela became involved with Limerick Show around the same time. Dicky said she has a special way with people.

“They used to come in to the office with some terrible issue and they would come out smiling, not necessarily having had their issue solved! She could solve any problem. She was always smiling, was hugely efficient but firm when she had to be.

“There is so much of the show that goes on in her head and she was so involved in every part of it so I am delighted that she will be there as a mentor and to help out,” said Dicky.

A collage of photographs from down through the years put together by members of the Limerick Show committee and a wonderful framed caricature were presented to Anglea.

She confesses to being “overwhelmed by the whole day”.

“I never expected so many people to be there. It has been really my privilege to work with all those people who work on a voluntary basis – they are just extraordinary people and so many of them have become really good friends.

“That is one of the joys of having been there so long - that I have such good friends,” said Angela.

”Humbling” is how she described the lunch in Adare.

“There are so many people who work so hard for the show and never get a mention. These are the unsung heroes of Limerick Show who work away quietly behind the scenes,” said Angela.

The young people who worked in the office always had a wonderful bond with her, remarked Doreen Corridan, cattle chairperson.

“When they came in during the summer they were really splendid. They took up the reins and did everything straight away,” said Angela.

One of them even sang for her on the day. Killian Fitzgerald performed Michael Buble’s Sway.

“I just can’t thank people enough for all their kindness, not only on Sunday, but all through the years as well. I was really very humbled, I ddn’t expect anything like that,” said Angela, who adds that if she is needed she will be there to “help in any way I can”.