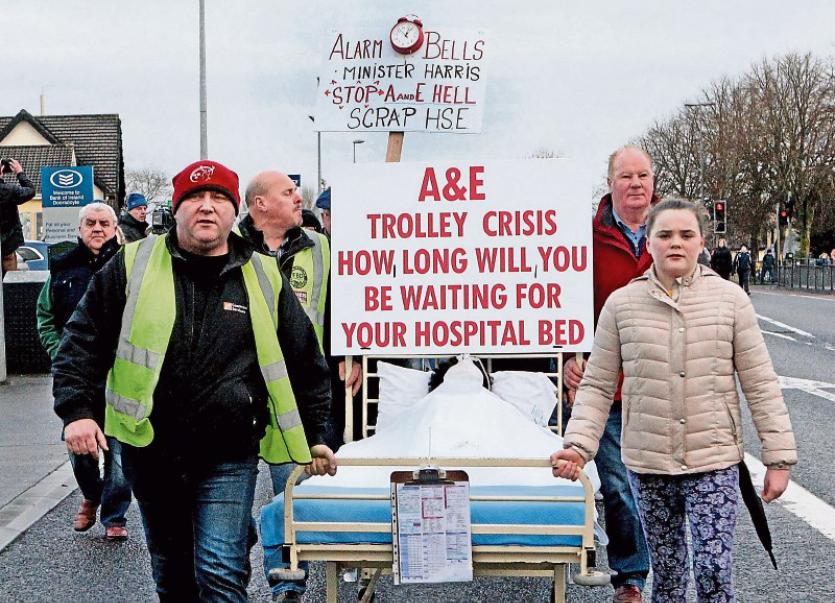 Protestors push a trolley at the march against the A&E crisis at University Hospital Limerick Picture: Dave Gaynor

MORE than 100 people have taken part in a protest against conditions in the accident and emergency unit at University Hospital Limerick.

A mock-up of a trolley with a dummy patient and a placard asking the question: 'How long will you be waiting for a hospital bed' headed the march, which started from opposite the gates of the Dooradoyle hospital, before heading to the Ballykeefe roundabout, and back.

Demonstrators chanted: 'Simon Harris, hear our plea, open up our A&E', as a message to the incumbent Health Minister.

There were also chants directed at Limerick Finance Minister Michael Noonan, who was not present.

One of those taking part, mother-of-four Lolly Hayes from Corbally said: "I have been a victim inside the regional for many a year. I have waited 28 hours on a trolley before. These problems go back ten years. They have not just happened all of a sudden. But it is a holy disgrace."

The 'people's protest' was organised by Donal O'Brien, Pallaskenry and Ken McCarthy, Raheen.

Also addressing the crowd were the former Education Minister Jan O'Sullivan - who was greeted with a hostile reception - and Sinn Fein Senator Paul Gavan.

The organisers claimed Fine Gael Senator Kieran O'Donnell had planned to attend, but pulled out at the last minute.

Apologies were also received from the Irish Nurses and Midwives Organisation and the Irish Patients Association.