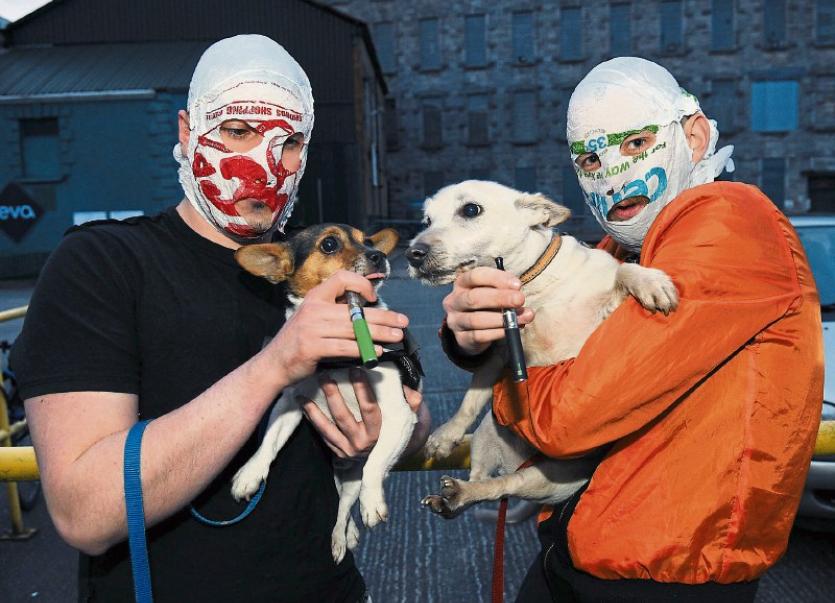 LIMERICK’S Rubberbandits are rubbing shoulders with Iggy Pop and Underworld on the soundtrack for the forthcoming Trainspotting sequel, directed by Oscar winner Danny Boyle.

The Limerick duo’s song Dad’s Best Friend has been selected for the soundtrack to Trainspotting 2, one of the most anticipated films of the year.

A source close to the ‘Bandits said that Boyle – an Academy Award winner for Slumdog Millionaire – was a “big fan” of the plastic bag wearing musicians-comedians and that the video for the song might also appear in the Ewan McGregor starring film, which is due out later this month.

Blindboy Boatclub explained to the Limerick Leader: “All of this became possible since we joined the Freemasons.

“It has allowed us to achieve many goals in the entertainment industry. All it requires is the worship of a giant owl and the sacrifice of ferrets in a fairy fort in Parteen when the moon looks like Marty Morrissey’s forehead.”

The ‘Bandits, who recently featured on an extremely well received and much watched series on RTE, as well as bringing their gameshow to MTV USA, are expected to have further news for 2017 in the near future.