Sadness in Limerick at death of Lionel fan Damien 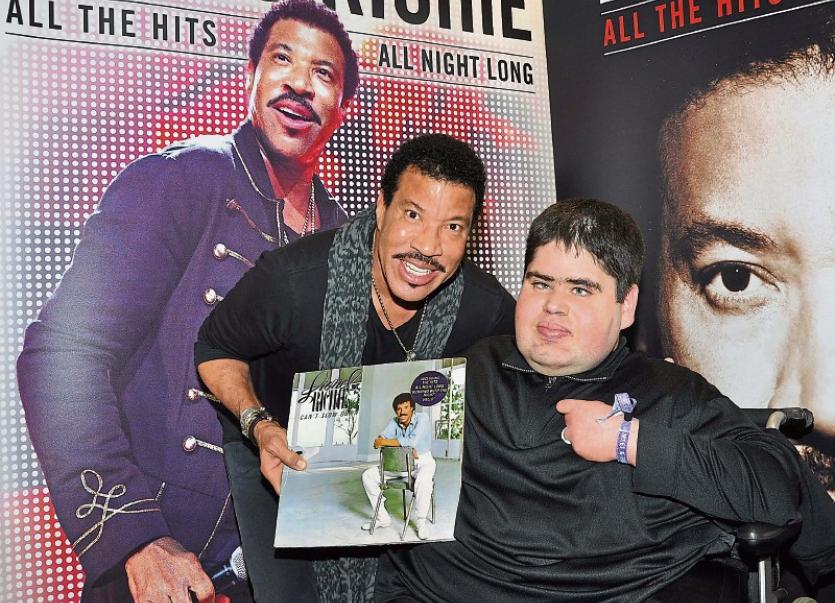 A HEARTBROKEN mother has paid tribute to her eldest son who passed away unexpectedly but peacefully at his Limerick home this week.

Damien Woods, aged 31, from Glenbrook, Old Singland Road was remembered by his beloved mother Cora this Tuesday as “a great son, and a pleasure to look after”.

“He was very pleasant, very easy going and very easily pleased,” Cora told the Limerick Leader following the death of her eldest son on Monday morning.

Damien’s father, Declan, is well-known in local sporting circles having played soccer with a number of clubs in Limerick including Pike Rovers and Fairview Rangers. Declan also represented Limerick on the Oscar Traynor team.

Damien, who had spina bifida, saw his dream come true in 2015 when he got to meet his idol Lionel Richie, thanks to Clare’s Wish Foundation.

Along with Lionel Richie, Damien also loved Bryan Adams and George Michael who Damien sadly learned had died on Christmas morning. He was also a big sports fan.

“He loved snooker since he was a small child. He met all the snooker players, Stephen Hendry and Ronnie O’Sullivan,” Cora explained.

While Damien had experienced some health problems in the past, he had enjoyed overall good health.

“He had a good Christmas. He was happy to watch the soccer and the Premiership. He got a Fifa soccer game for his xBox and loads of box sets,” said Cora who wishes to thank all Damien’s neighbours, friends and family - including her own family, the O’Dwyers, for their support.

Damien is survived by Cora and Declan, sister Simone and brother Killian, niece Grace, grandparents Breda O’Dwyer and Patrick and Dolores Woods, extended family and his many friends.

Reposing at Griffin’s funeral home, John’s Gate on Thursday from 5pm. Removal at 7pm to St John’s Cathedral. Requiem Mass on Friday at 11am with burial afterwards in Mount St Lawrence Extension Cemetery.