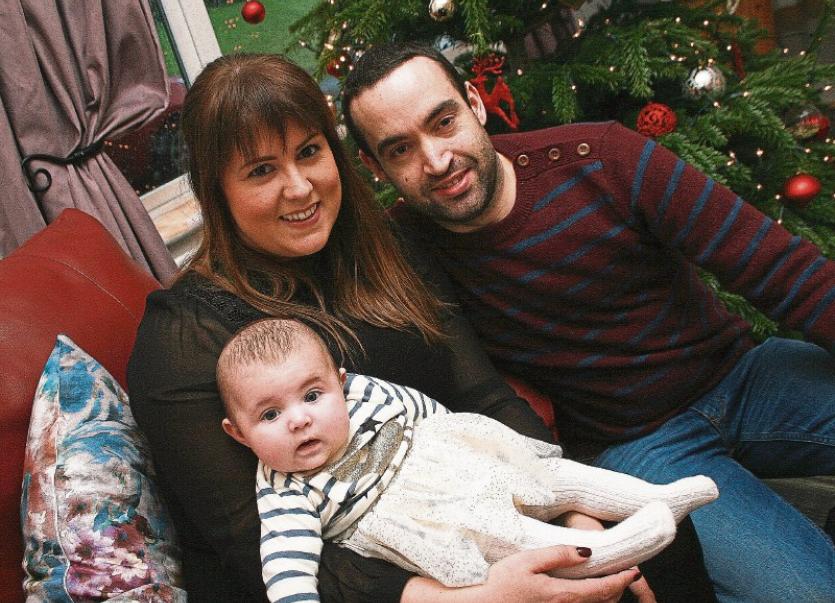 TWO Bruff parents celebrated the gift of life this Christmas and new year with their newborn “miracle baby” Sadhbh, after her proud dad Padraig overcame a five-year battle with testicular cancer and underwent a kidney transplant.

“To go from the morbid side of life, of whether or not you will have one, to the other side of life of having a new baby, it was a beautiful moment,” said Padraig McCarthy, who last week shared his first family Christmas dinner, with his wife Louise and their four-month-old daughter.

But before baby Sadhbh was born in August, the couple had journeyed through half a decade of difficult times, following a cancer diagnosis and dialysis treatment.

Padraig and Louise were two weeks’ engaged when he was diagnosed with testicular cancer in February 2010, at just 29-years-of-age. Luckily, he said, it was caught early, at stage one.

The Ballinacurra Gardens-born chef underwent years of monitoring and follow-ups and received the “all clear” this April.

“It had a very profound impact on me for a number of years,” he said. “Even trying to deal how you break that to your family was difficult. How do you lay it out there and not be able to give a firm view of what the outcome is going to be?”

He said that there was great relief when he was told he had the all clear this April. Padraig won RTÉ’s Taste of Success in 2014 and is Ballyhoura Development’s food strategy officer.

“To be told: ‘That’s it - good luck. You don’t need to come back.’ There’s a lot to be said for that. But there is some comfort in going every couple of months and having that monitor, and to have that reassurance.”

But Padraig had another medical issue to deal with at the same time. At 18, during a routine assessment, he was diagnosed with a serious kidney disease, IgA nephropathy. But it wasn’t until three weeks after their honeymoon, in April 2013, when he was told that he had to be put on dialysis.

His kidneys “had taken a dramatic and sharp drop” to 10% functionality since his previous check-up. Six months before the operation, he engaged in physical assessments to prepare himself for the “arduous surgery” at Beaumont Hospital, in Dublin.

“And from that moment on, you are on-call. The transplant coordinators have your mobile number, and they tell you when you leave, you have to pack your bags, and have them ready on standby in the hall, or car, or wherever may be. But, again, like that and everything else, it kind of slowly starts to slip to the back of your mind.”

And when the hospital called him on January 22, 2015, at 10am, his father-in-law drove him to the capital city, arriving at 12pm and was under the knife by 4pm. Immediately after the surgery he felt a “freshness”.

And more than year later, baby Sadhbh entered their world.

“It was mind-blowing. Coming from the last five years together, it was quite a difficult time, and not knowing, myself, because you do question your own mortality. And I was always thinking: ‘Would I have a family?’ And to go from that, to that news, when Sadhbh was born. It was amazing,” he enthused.

And for that, he is thankful for his donor.

“It may sound cliché, but you think about it everyday. For me, it tends to be at night, when I am in bed and going to sleep. There’s never a day that it doesn’t cross my mind, about the family, about what they lost and their great sadness that had to happen for me to receive an organ and the gift of life.”

Being their first Christmas, they took Sadhbh to meet Santa for the very first time at Bunratty two weeks ago. And because Padraig is a successful chef, he was definitely on kitchen duty this Christmas!