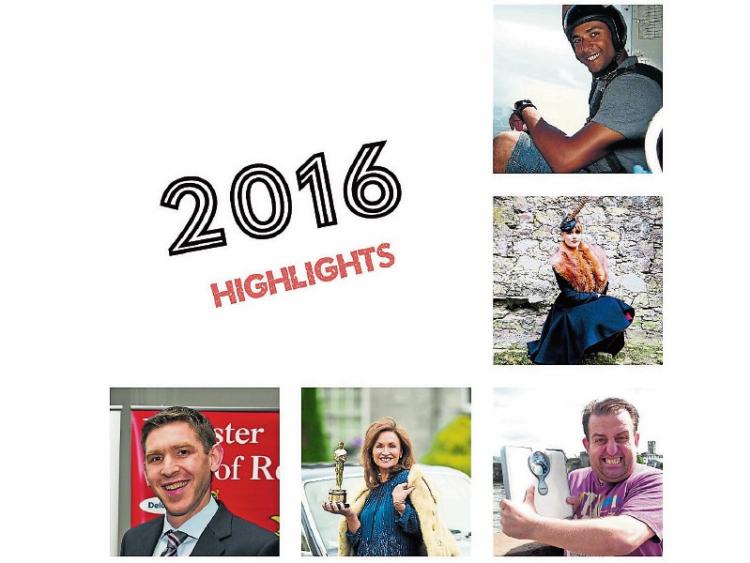 FROM landing major book deals, to producing documentaries, losing weight, getting married, getting elected and re-elected, it was an eventful year for many of Limerick’s most well-known faces.

Here are some of their top moments from the past 12 months and a few low points too:

“The high point of the year would be taking part in Celebrity Operation Transformation on RTE. I lost two stone and I’ve kept most of it off. I had kind of given up on the thought of losing weight and I surprised myself and those close to me with my ability to follow the plan and to get through it. I’m usually good at Christmas because I’m busy and there’s lots of stuff on, my problem is when I’m bored, I have a tendency to eat rubbish to pass the time. I don’t drink, smoke or do drugs -I’m far too clean living! Another high point is the panto. I’m doing Beauty and the Beast at UCH at the moment and it’s been really good - it’s going on until January 8.

The low point was the election of Trump, and the rise of right wing politics in the world is a bit of a worry and the loss of so many celebrities - Terry Wogan obviously for us in Limerick but you had Bowie, Prince, Leonard Cohen, Ronnie Corbett, Gene Wilder and now George Michael - there seems to be a lot of talent gone in this year. It’s a sad time.”

Dan Mooney, Author of Me, Myself and Them: Your Own Worst Enemy, and an air-traffic controller:

“I self-published my book back in June, and I thought that would have been my highlight of the year. I had been threatening to do it for so long and I still hadn't done it. I thought that if I got somewhere around 200 sales for a self-published book that I would consider that to be a success, and that I'd move on to something else. Then on a whim I submitted it for the Luke Bitmead Bursary [winning the prize of £2,500 in November and the book deal].

"The book is coming out on June 1 next, through UK publishers Legend Press, and I've since had to take it down from Amazon, after selling 350 copies, because it's not mine anymore; it belongs to the publisher. I'm aiming to have a first draft of my next book done and ready for the publishers on June 1. I'm still working as an air traffic controller, which is my bread and butter, and I love that job. Shift work means I've more time off than others would have, and I'm hoping that at some point down the line I'll be able to sell enough books that I can turn my head to it full-time. One of the screenplays I wrote for the City of Culture in 2014 was on RTE, starring Aidan Crowe and Andrew Bennett, about three weeks after I won the award and got the book deal. It was equally unexpected but not unwelcome.

"I've just learned that the screenplay, The Apparel, which I wrote under the tutelage of Gerry Stembridge, has been selected for the Chicago Irish Film Festival. All that has happened this year has way, way surpassed my expectations."

“My highlight of 2016 was travelling back to Nigeria, where my family is originally from, to film a documentary for RTE, which was broadcast last week, entitled Miss Nigeria & Me. Next year I'm planning to break a Guinness World Record attempt in doing the highest bungee jump from a hot-air balloon. It'll be at 20,000ft, and it absolutely terrifies me but I'm hoping to raise a lot of money for charity.”

“That's easy enough - my high point of 2016 was getting re-elected and topping the poll, and helping in the background to facilitate the formation of the Government. I was very glad to get a very good vote again. As opposition spokesperson for social protection, I was glad to see increases in social welfare for the first time in five years and bring an end to regressive budgets.”

“The personal highlight was forming the Government because it looked like mission impossible and yet we formed a government. The personal highlight was getting the Budget through - because that was the test. If you can't get a budget through, you don't really have a Government. I got good co-operation, and my colleague across the Dail, Michael McGrath of Fianna Fail, played a significant part in that.”

“Getting elected was of course a huge high, but I think the day I walked into the Dail for the first time as an elected deputy on March 10 was even better. I think we all enjoyed that more - it was more relaxing. A count is always tense. You're never elected until you hear your name called out. My mother, wife and sister were with me when I walked into the Dail, so that was special.”

Mike Fitzpatrick, Head of the bid for Limerick to be European Capital of Culture 2020:

“The highlight for me is that there has been such positivity in Limerick, even after the disappointment of not getting the European Capital of Culture. It's great to see that industry and business now recognise the power of culture. The low point was the disappointment of the citizens of Limerick - you've to manage your own disappointment. I'm thrilled there is a decent pot of money for next year.

"Culturally, there is a long way to go, but I can't wait for the first movie [to be shot] in Troy Studios. When someone says 'Action' - that'll be a great moment, and I'm also looking forward to returning to the Limerick School of Art & Design in the new year.”

“I have had an amazing 2016, personally and professionally. Being elected Mr Gay Limerick has offered me the opportunity to engage proactively with the issues of the city and to promote equality and kindness. Some of the highlights of this year have been participating in Limerick Pride and all the support that I have received, seeing people of all ages join and celebrate equality just fulfilled my heart.  Supporting Pieta House has been brilliant - they do an amazing job and do not get enough credit.

"I have also been involved in many commendable initiatives such as the 'Purple Up' rally against violence against women, the Novas Toy Appeal, and campaigning and raising awareness around HIV.  From a personal point of view, the publication of my novel based in Limerick has been an important moment in my life.”

“For me 2016 flew by! I began the year with a trip to Italy exploring the culture, history and cuisine. I signed with the Andrea Roche Agency which has opened up so many opportunities for me as a model. Over the summer I got to sail around Sheep's Head in West Cork with my uncle which was amazing. Last but not least, I married Gavin. We had the most magical celebration at Ballyvolane House surrounded by close family and friends. Undoubtedly, it was one of the best weekends of my life. I'm so thankful for all of the experiences of 2016 so on a personal level it was a great year. I'm excited to see what 2017 will bring.”

“Being part of the Limerick 2020 bid was the highlight of the year for me. On Tuesday, July 12 when the jury delegation visited Limerick, the pride and desire to be European Capital of Culture shown by everyone was palpable. Even though we didn't win, I think it is true to say that 'No matter how hard the loss, defeat might serve as well as victory, to shape the soul and let the glory out'​ (Al Gore Snr)”

“My first day as a trainer in May was definitely a high point as well as having two winners and a second in Mallow in July.”

“The high point first of all was the huge success that the Oxendales campaign was with yours truly, who is well over 60, fronting it. I was very proud of myself so that was a huge high. The Rose of Tralee this year was a massive high for us as well as the Ploughing Championships and the Maureen O’Hara fashion festival. On a personal level, I’m just delighted that the grandchildren are all doing well. The low for me was to learning the hard way that when something's not right about your body or your health that you go and look after it. I didn’t do that and ended up sick due to my own neglect. I had a cold for about three weeks and I  got up at five in the morning and went off to Dublin, dying. When I came home then I couldn’t breath - I ended up getting pneumonia. I did it to myself.”

“I was lucky enough to referee Italy and South Africa in one of the November Tests. It was a historic result because Italy beat South Africa for the first time and it was a match that went very well for me personally. It was an upset victory but nobody was pointing the finger at the match official. There was a beautiful post-match reception in the wonderful Palazzo Vecchio in Florence which is full of works of art by Michelangelo and Leonardo and Leonardo da Vinci so that was a very special moment.

"I was in the US around the time of the US General Election campaign and it was a very interesting time to see what was happening there and to get a feel on the ground for groundswell of support that came for Trump. I wasn’t too surprised when his election happened.

"The low point was the Nice attack. It’s an area I know quite well. Where that truck came to a stop is directly outside the hotel that we use when we are down in the South of France refereeing games. I know some of the staff down there and I was in contact with them directly afterwards and it was obviously a very traumatic experience for everybody. I had walked down that promenade many times, the Promenade des Anglais.

"The other low point was obviously the passing of Anthony Foley. I was in Exeter about to referee Exeter against Clermont in the Champions Cup. The Munster match was on at 3pm and my match was on at 1pm. Word filtered through about Anthony. I went to school with him in St Munchin’s. I was in the same class as him and obviously I would know him from training out in UL as well.

"Obviously that was the most difficult circumstance I have ever had to referee a match in, especially when there was a minute’s silence and you are trying to hold it together. It was a very emotional time. The following week I was refereeing Toulouse and Wasps and I wore a number 8 on the back of my jersey just as a mark of respect.”