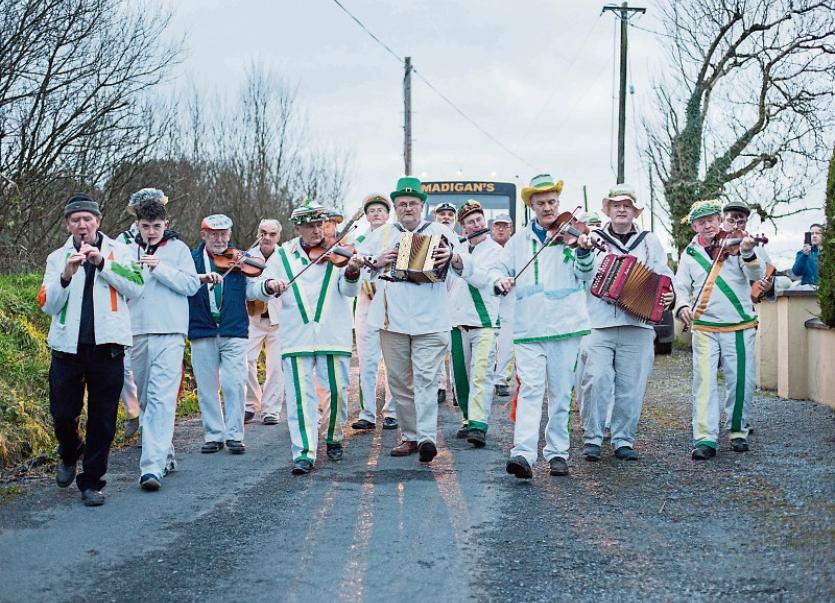 The Glensharrold Wrenboys were pictured on the Wren in Carrigkerry on St Stephen's Day Picture: Marie Keating

ONCE upon a time, every parish and nearly every townland in West Limerick had its own band of Wrenboys when musicians, dancers and singers travelled their locality, bringing fun and laughter into homes on St Stephen’s Day.

They were, for many people, an integral part of the Christmas festivities and represented neighbourliness, comhluadair and excitement.

That day is gone now but the tradition, happily, refuses to die and West Limerick remains a stronghold for the Wrenboys.

Few sounds are as evocative as the beat of the bodhrán as it approaches through the gloaming and the deep chanting of the oncoming band, with their generations-old call:

So up with the kettle and down with the pan

And give us a penny to bury the wran.

But the essence remains the same and is as enjoyable as ever according to Paddy Finucane who has been heading up a band of Wrenboys in Abbeyfeale for over 20 years. “I don’t play myself,” he told the Limerick Leader. “But I’m mad for it.”

He and his group collect for charity and go out twice, once on Christmas Night around the town and again, on St Stephen’s Day when they travel the surrounding countryside in a van.

“Christmas Night is a great night. They are all in on Christmas Night,” he explains. And the tradition of open-handed hospitality for the Wrenboys continues, with tea, sandwiches and drink on offer.

Abbeyfeale hosted several groups this year, among them members of the Newcastle West and District Pipe Band.

Carrigkerry remains a national beacon for Wrenboys, having won several national Wrenboy titles over the years. And this year was no different with different groups, including one from Glensharrold, heading out for a long day in the homes and hostelries around Carrig, wearing their traditional colours.

Killeedy too has maintained the tradition and has been steadily working to keep it alive and thriving. They have won the national title in Listowel at least twice and last year invested in new costumes. This year, the slow meander of the Loch a Gé group round Killeedy homes, encountering younger, less experienced groups along the way, lasted a good twelve hours though longer stints have been known to happen in the past. “The welcome was very warm,” one of their number declared. “People like to have us a while. And especially where there is a generation with good memories of the Wren, they want to hold on to us.” They were helped along the way by the Dromcollogher Respite Centre’s bus and the money collected this year will go to the centre.

Ballyhahill too, and nearbly Kilcolman, sent out their own groups of Wrenboys and welcomed others in.

As with many seasonal Irish traditions, the history of Lá an Dreolín or Wren’s Day dates back to pre-Christian Celtic Ireland, when the tiny wren was the mythological king of birds. Dreolín, the Irish for wren, is believed to be derived from 'dreán' or 'draoi éan' meaning 'druid bird'. In bygone days, a real life wren was hunted and killed, then carried around in a cage or box or holly branch before being buried with a penny at the end of the day.

That element of the tradition has died out but there are several explanations for the tradition. has been lost. According to one version, treachery is at the heart of it. When the Irish forces were about to catch Cromwells troops by surprise, a wren perched on one of the soldiers’ drums made a noise that woke the sleeping sentries just in time, thereby saving the camp.

Another explanation is that the wren betrayed St. Stephen, the first Christian martyr, by flapping its wings to attract his pursuers when he was hiding. Yet another explanation is that the hostility towards this most harmless of creatures results from the efforts of clerics in the middle ages to undermine the vestiges of druidic reverence and practices regarding the “druid bird”.