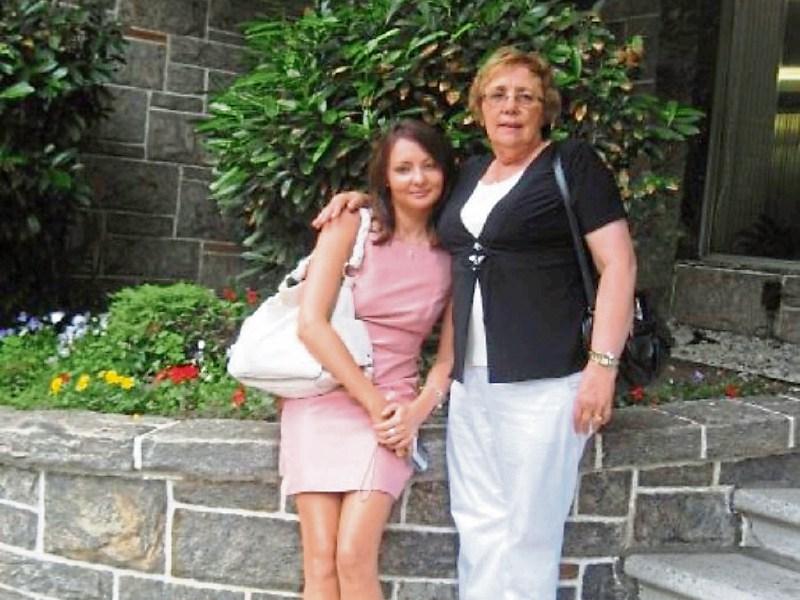 Olivia O'Leary with her mother, Bernie

A DAUGHTER feared her mum would end up in hospital such was the shock she gave her when she arrived in her kitchen unannounced to celebrate her first Christmas at home in 12 years.

Dressed in her pyjamas and dressing gown, Bernie O’Leary was minding her own business, cleaning up in the kitchen of her home in Knocksauna, Kilmallock when her daughter Olivia appeared out of nowhere.

Such was her shock on seeing the outline of her only daughter in the middle of the livingroom, Bernie froze on the spot, dropped the ware in her hands into the kitchen sink before clasping her hands over her mouth.

Then came the first of a series of unforgettable embraces followed by tears, but very few words.

Poor Bernie was unable to speak with the shock of it all.

The extraordinary moment was captured on camera by Olivia’s brother Brian and has been shared hundreds of times on Facebook.

“I thought I would have to go to the hospital with her, honestly, she was so shocked to see me,” Olivia told the Limerick Leader from her Kilmallock home this Christmas Eve.

“I’ve made more people cry with that video,” she smiled.

Olivia, or Libby as she is known to her friends, left New York on Monday and arrived at the doorstep of her childhood home on Tuesday morning.

“My brother Brian picked me up from the airport and we went and picked up some groceries and came back here straight away,” she explained.

“I was last home around four years ago but this is my first time home for Christmas in 12 years.”

While Bernie had no chance to prepare for her moment in the spotlight, according to Olivia, her ecstatic mum didn’t mind one bit that the touching moment was recorded.

“She is delighted with it, she watches it more than me,” she giggled.

Olivia left Kilmallock 12 years ago to go travelling with her good friend Laura Conway, also from Kilmallock, and hasn’t been home for any considerable length of time since then.

Once again she is on a flying visit, jetting back Stateside on Monday.

“It’s back to work,” said the 32-year-old who is the brand manager for Jägermeister in New York.

“I’ve been in the States on and off now for 12 years. I went travelling for the first two but I’ve been settled there now for 10 years.

“I’ve always been working in bars and restaurants. I started off in Mike Houlihan’s (in Kilmallock) back in the day and I was opening and managing bars and restaurants in New York for eight years. I’ve been with Jägermeister now going on two years. New York is my home now – I come home to Kilmallock for visits.”

Bernie has been out to see Olivia who lives in Astoria, Queens, a few times, but, understandably, Olivia misses her mum, her dad Ollie, and brothers Brian, Tony - who lives in England - and younger brother Jonathon, dearly.

She is fortunate however, to have some close friends from home, living near her in New York.

While she first found the New York lifestyle very difficult to adjust to, it’s now a way of life, and she considers the Big Apple to be her home.

“When you get used to the lifestyle over there, it’s very hard to come back and adjust. I remember when we first went over we were staying with Shaun at the time. I remember we were five girls travelling the world and we were sleeping on his floor while we were looking for apartments. I remember his friend was working round the clock. She went to a job during the day, got home at around five, had a quick shower and went off to work as a bartender in the evening until four or five in the morning.  I thought it was absolutely crazy and wondered ‘how does anyone live this lifestyle’ and then when you are over there you start doing it and it becomes natural. If you’re not working six or seven days of the week it’s like ‘what are you doing’. You definitely have to work to make a name for yourself because it is so competitive, but once you do,  then New York is very small and the word of mouth spreads so quickly you would be surprised how talking to one person leads to another and that’s how I got offered this job with Jägermeister. It takes a while to establish a name for yourself but once you do, the opportunities are endless."

And has she hit the bright lights of Kilmallock since her return home?

“I was out last night for the first time since I came back but I’ve been really focusing on visiting family and making sure that I see everybody while I’m here,” she smiled.