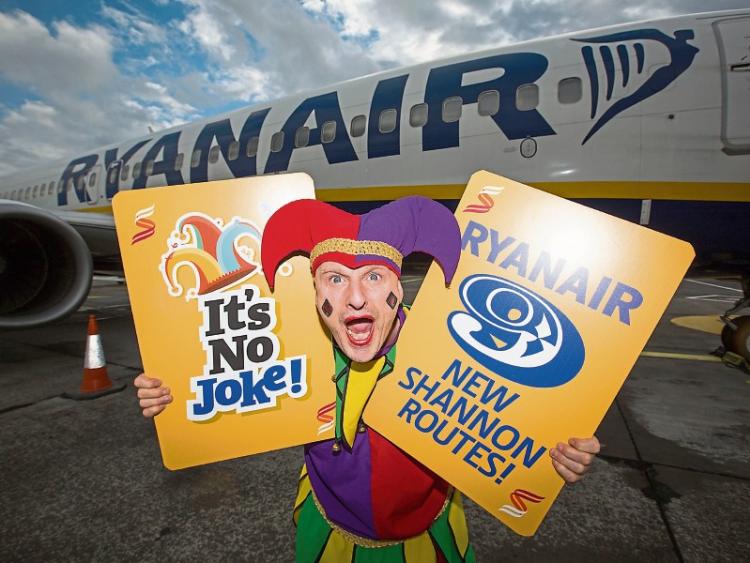 RYANAIR has confirmed it is to ‘slightly reduce’ its services from Shannon Airport in 2017.

A Ryanair spokesperson confirmed to the Limerick Leader that scheduled services to Paris Beauvais and Memmingen will stop next summer, while capacity on two UK routes is to fall.

“Our Shannon routes to Paris Beauvais and Memmingen will not operate next summer, while we’ve slightly reduced our London Stansted and Manchester routes due to weaker demand from UK visitors post-Brexit,” said a spokesperson.

“However, we have increased our Lanzarote service and look forward to offering the lowest fare Shannon sun routes to the likes of Alicante, Faro and Malaga next summer,” they added.

A spokesperson for Shannon said: "While schedules have still to be finalized, we are confident that in 2017 the airport will improve on its 2016 performance which saw the airport enjoy its fourth successive year of growth.

"We continue to work with all our airline partners to maximise potential for Shannon and this remains a work in progress. We have four new airlines announced for 2016/2017 (Kuwait, SAS, Lufthansa and Norwegian). It’s been over 10 years since Shannon has announced four new airlines in any one year and we look forward to building on this capacity."

A Sunday Business Post report claimed that Shannon is to face a “substantial drop in traffic next summer” on both its transatlantic and European routes, according to industry data it has seen.

It claimed that Shannon’s total seat capacity for summer 2017 would be 6% down year on year – reducing capacity by 85,000 passengers compared to this summer period.

It also said that Ryanair was taking 100,000 seats out of Shannon – reducing Shannon to Stansted from 16 flights per week to 12.

The newspaper claims Aer Lingus, conversly, is to grow its capacity by 2% – or 10,000 seats – on short haul routes, but yet is to fly a smaller plane on its Boston service next summer.

The recent news that Norwegian is to operate transatlantic flights from Shannon next year is thought likely to affect Aer Lingus' US services however, with chief operating officer warning last week that the Norwegian services “may have an effect on Shannon, where historically Aer Lingus has been committed to serving Boston and New York.

“We obviously will do our best make sure that effect is as minimal as possible,” he added, according to a report in the Examiner.

The Aer Lingus CFO was speaking as the airline announced increased services from Cork Airport last week. In reponse to a query from the Leader, a spokesperson said last Wednesday’s announcement was “about Cork only”.

Shannon recently announced that it expects passenger numbers to rise this festive season by around 5%.

Over 70,000 passengers are expected to pass through the airport between last Friday, December 16 and January 3 – up from 66,500 over the same period last year.