He has a wardrobe of clothes, wears cologne and has 12,000 followers online 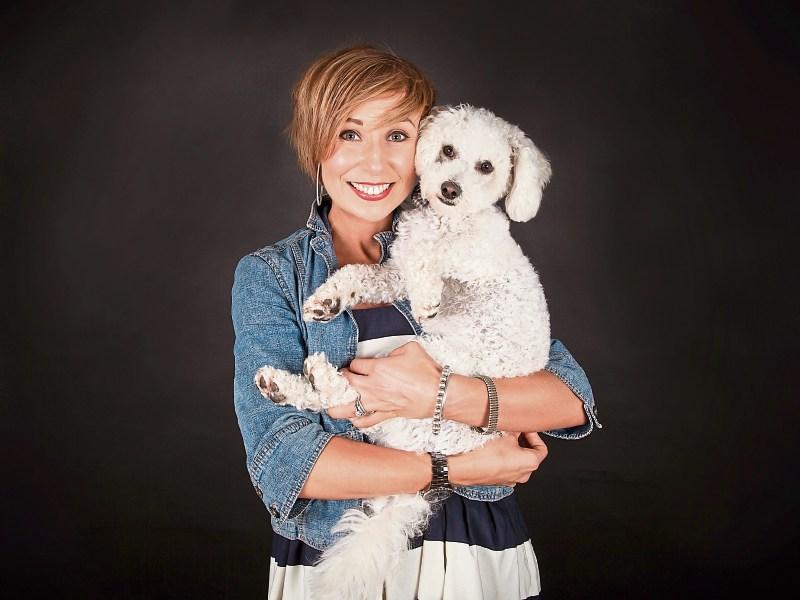 HE has his own wardrobe of clothes. He sleeps in a bed with an electric blanket. He wears cologne,  loves getting his tummy tickled and has 12,000 followers on Instagram. And he's a dog!

Luca, a bichon frise, is the apple of Bee Cleary’s eye.

The Kilfinane native purchased the snow white pooch after seeing a photograph of him and thinking to herself ‘‘Oh my God I have to have him!”.

“I had wanted a dog for ages. My husband and I felt that it wasn’t very fair to have one because we both work every day and then I saw a picture of Luca online,” explained Bee who lives with her husband Karl Burns in Rathcormac, County Cork.

Unbeknownst to Karl, Bee headed off to the dog breeder in Kilworth.

“I rang my husband and he said ‘where are you going?’ and I said ‘I am on the way to collect the dog’ and he said ‘you mean the dog we said we weren’t going to get?’” Bee smiled.

When she arrived at the yard in Kilworth there were two identical dogs looking up at her.

Luca ran over and jumped into Bee’s designer handbag which was on the ground. And so began his charmed life.

On a typical morning in the Burns' household, Luca rises from his bed - which is located at the foot of Bee and Karl’s bed.

The next step is choosing his outfit for the day. Bee’s mother-in-law Betty Burns in Blackrock minds him during the day.

He has a Barbour jacket for these biting cold mornings.

“I love them so I got him one to match.  Barbour actually do a range for dogs so I just went onto the Barbour website and ordered it online. It was about €40 which isn’t that expensive compared to a human’s jacket.”

He also has a little tux.

For the month that’s in it, he has a festive wardrobe to choose from featuring Christmas bandanas and Christmas jumpers. Bee’s nieces Sophie and Katie Cleary McCarthy from Kilfinane can’t wait to see what his Christmas day outfit will be.

“He has a different outfit for every day of December. He wears something different every day going into his granny. He hates being cold so if we are leaving in the car we have to put something on him before he goes out because he absolutely hates being cold. He has loads of different coats and hoodies but it’s Christmas jumpers now at the moment he is wearing. We take it off when he is in the house.”

Before he heads off to Betty’s, Luca enjoys some playtime.

When he comes home in the evening Luca first goes for a walk and then he lies down in front of the stove in preparation for his frozen kong.

If a dog comes on the television, Luca pricks his ears and turns them back with excitement.

He also has an Advent calendar - a doggy Advent calendar which reveals a new page every evening. “We do some training some evenings as well. He picks up things very, very quickly so we do a little bit of training and then he curls up beside my husband.”

On bath nights, Luca’s fresh blue bathrobe which has a hood is laid out. ready to go.

“I bath him once a week because he is a white dog so if he gets in anyway dirty it shows up. Then he gets groomed once every four weeks. I don’t use a dog shampoo I actually use a shampoo for newborn babies so there are no preservatives or anything like that in it so it’s really safe.

“It’s a Johnson’s newborn baby shampoo but then he has his own cologne spray as well - it’s a doggy cologne. He has that as well. Now he hates when I put that on him but I put it on him because he smells so cute.”

Owing to his white fluffy coat, Luca must be brushed every single day. When Bee takes him to the dog groomer she never wants value for money.

Luca loves being cosy and likes nothing better than snuggling up in his bed with his electric blanket.

“It’s so funny - you can actually buy electric blankets for dogs - they only heat up when the dog lies on it - they are really safe.  He is just one of these dogs that hates being cold. He has his own bed in our room. He has to have a pillow and put his head up on something - he won’t lie down flat. It’s at the end of our bed so he gets in there when we go to bed but then at around 1am he jumps up and snuggles on top of the bed in between the two of us. Every single night he does it. He is like my child I love him so much.”

As well as having two awards to his name -  the Irish Daily Mail’s Prettiest Pooch title and Ireland’s Next Top Madra - Luca has a staggering 12,000 followers on his Instagram account.

“I update it three times a day with three different photos. People really interact with him. One girl in Switzerland has a dog which is nothing like Luca but she loves him and wants to send him a Christmas card”.