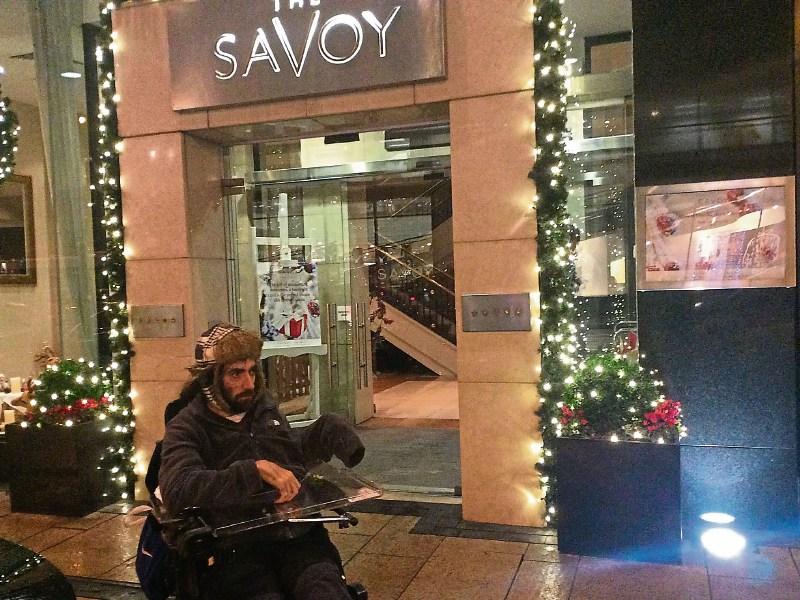 The photo of Ronan that was posted online

THE manager of a luxury Limerick city hotel has denied claims that the hotel unfairly discriminated against a customer who uses a wheelchair.

Ronan Branigan, manager at the Savoy Hotel, spoke to the Limerick Leader this Friday morning in the wake of a Facebook post that went viral that accused a staff member of asking the man to leave on the basis of his disability.

“The early signals are that we had a wheelchair guest in the lobby of the Savoy last night, and the wheelchair was quite large and cumbersome,” said Mr Branigan.

“As far as we can understand at the moment, he was asked just to move across the front of the reception, out of the fire escape way which was being blocked, and unfortunately the communication was misunderstood or misconstrued and taken to be a request to leave the hotel, which it certainly wasn’t,” he added.

The original posting by Jay Reddan about his friend Ronan has received more than 5,000 likes and almost 3,000 shares on Facebook. There have been over 1,500 comments under the post, with many calling the incident "disgusting" and "disgraceful".

In it, Mr Reddan said that “Ronan was forced to leave in the lashing rain, even though they served him food and he had a half a pint with two straws when I arrived”.

“When I arrived at the Savoy I was immediately confronted by a doorman inside wearing a suit who said Ronan had to leave as he was in the way of the busy traffic of customers, I said to the doorman he should go say that to Ronan himself because I am not his minder or relative I am just his friend,” the post read.

“The staff in the Savoy have been very good at accommodating Ronan anytime he arrived, mainly one fella in particular who was very sound altogether.

“But the excuse that he was in the way of people is absolutely unacceptable. He was nearly crying as he left and he went over to thank that sound fella for his help throughout the year when he arrived, however he ended the conversation saying he would not be back,” continued the post.

The manager said that Ronan was “a regular guest here with us and always gets very well looked after by all of the staff”.

“We are reaching out to Ronan to have a chat with him and explain the situation,” added Mr Branigan.

“We’re very sorry that the information was misconstrued in that way, but it was certainly not the intention.”